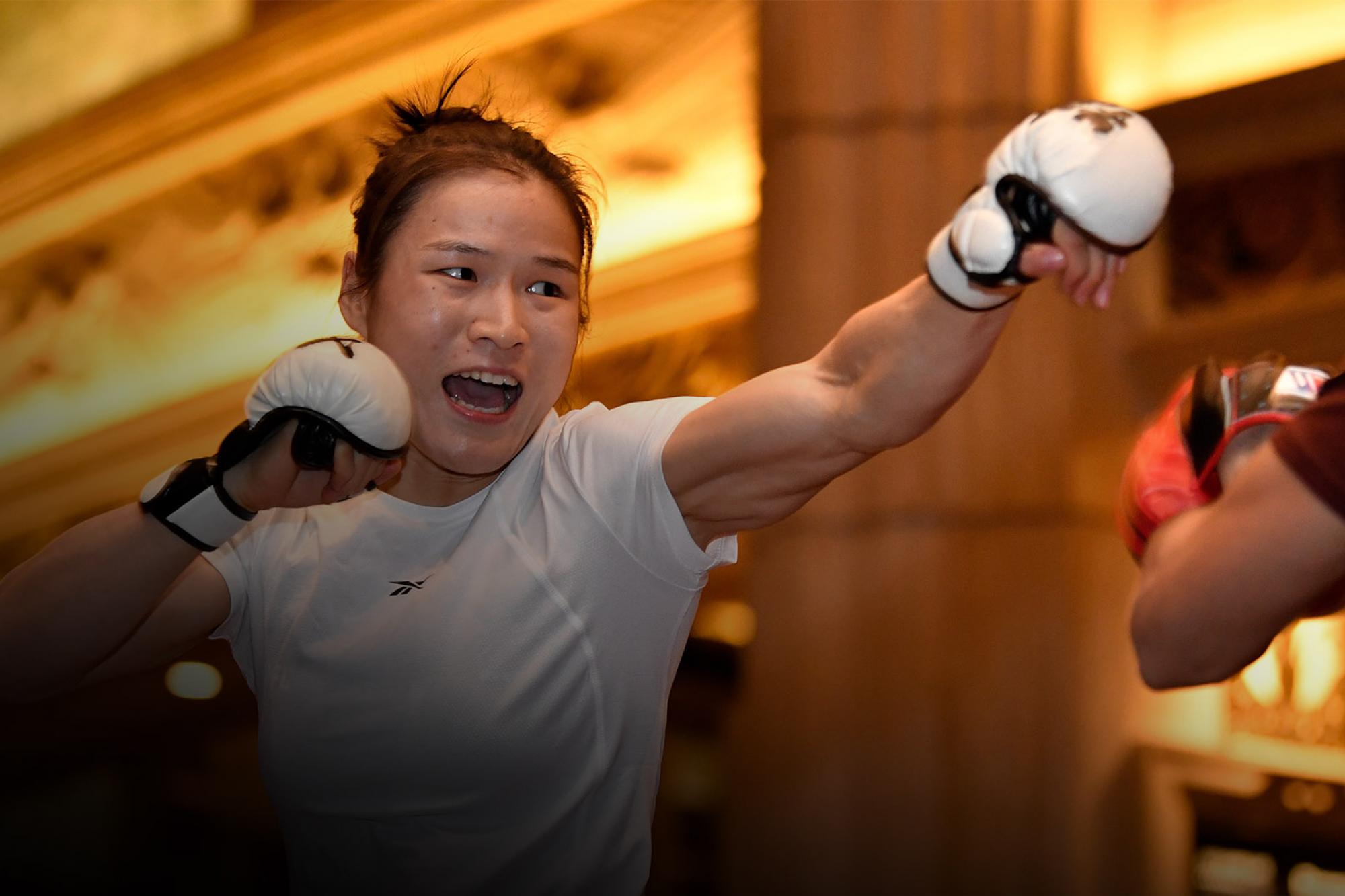 A pair of epiphanies led Zhang Weili to UFC gold and her first title defense against Joanna Jedrzejczyk.
By Thomas Gerbasi, on Twitter @tgerbasi • Mar. 5, 2020

Zhang Weili calls it “an epiphany,” and oh, what a time it was to have one.

One punch from UFC strawweight champion Jessica Andrade already came perilously close to her chin in their championship bout in Shenzhen last August, and another was on the way. It was in that moment that Zhang realized what her coaches had been telling her all along.

“I had a very clear head in the Octagon,” she recalled. “When her first punch scraped my face, I realized my chin was a bit high, so on her second punch I lowered my chin. Then I had an epiphany: Your chin has to be low if you’re on an attack. If your chin is high, your body can’t attack.”

Zhang lowered her chin. Then she attacked. And at 42 seconds of the first round, the 30-year-old native of Hebei became the first UFC champion from China. Then the madness began.

“The first month or so after I got my championship belt, I was super busy,” said Zhang, and that’s not surprising considering she comes from a nation of over 1.4 billion people. “It was the busiest month of my life. My schedule was filled with constant interviews and photoshoots for media, so many of them. At one point I had to speak non-stop from early morning until midnight. And I just couldn’t speak anymore. It was so much more exhausting than training. (Laughs) At that moment I realized that training is such a blessing.”

It always has been for Zhang, a self-proclaimed “quiet kid” who found her voice in the gym, first in Sanda, then mixed martial arts.

“It dawned on me that after training martial arts and MMA, I became more confident,” she said. “I found something that I was really passionate about, that I feel really strong about. When I watched movies about fighting, when I watched them training, I’d get excited. This is my passion.”

That passion was expected to remain a hobby, though, as there were few opportunities on the big stage of MMA for male athletes in China, let alone women. And when an injury sidelined Zhang for five years, it looked like the end arrived before it began. It was an opinion supported by her parents.

“At first they were (supportive),” said Zhang. “But then I got injured and retired, so I stopped training for five years. They were convinced that girls should go to school, since I got injured a lot. But after I got a job, I worked with MMA and my passion in this was ignited again. So I told my family to allow me three years. If I could make it, I will. If not, I won’t regret it. They agreed and they’re more than supportive right now.”

There was still a long way to go. Yet in 2013, six years before she struck gold in Shenzhen, Zhang had her first epiphany when Ronda Rousey defeated Liz Carmouche in the first women’s bout in UFC history. Now she had something concrete to shoot for and she let everybody know.

“The moment I decided to go pro, I was aiming for the UFC,” said Zhang. “I was sure of it. Back in 2013, I posted on social media that as long as I hold on to my dream and keep challenging the great fighters, I will end up in the Octagon of the UFC. I had faith in myself even back then. And I had always aimed for the championship. When I told others about my dream, everyone assumed I was kidding. But ever since then, I’ve been working hard for my dream.”

Last August, the dream became a reality, but Zhang hasn’t stopped dreaming. Now, it’s a quest to keep the belt, one that begins this weekend when she faces former 115-pound champion Joanna Jedrzejczyk. It’s a fight Zhang was thinking of even before Jedrzejczyk knew who she was.

“When Joanna was still the champion, I watched her fights when I was still fighting domestically, and I set my mind on fighting with her and taking the belt from her,” she said. “But now it’s the other way around. She’s trying to take the belt from me. And I’ve always thought that we’d meet in a fight. I think she’s an opponent who deserves to be respected.”

That doesn’t mean Zhang will sit idly by for any trash talk from her opponent.

“I know who she is,” said the champion of her challenger. “It’s all part of her tactic to curse and make you angry before going to the fight. I won’t take her seriously. I know she’s just acting. I won’t curse her. In Chinese culture, one does not curse to show her attitude. I will show her my attitude with my punches.”

And by the time Saturday night turns into Sunday morning, Zhang expects to still have her title intact.

“This championship belt is past tense for her,” said Zhang. “She should live with that.”