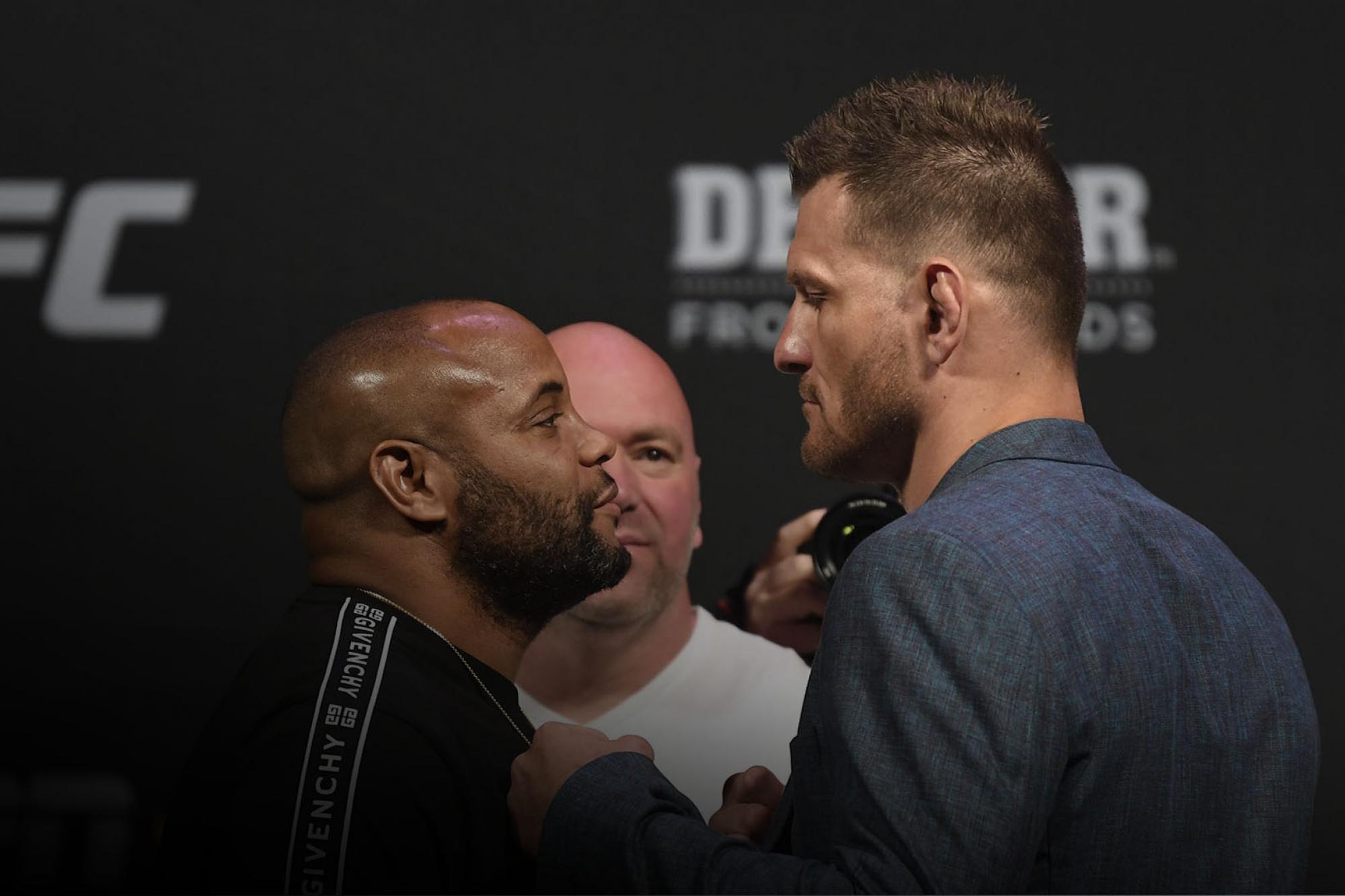 We Asked The Fighters Sharing The UFC 241 Card For Their Main Event Prediction
By Zac Pacleb • Aug. 16, 2019

It's the heavyweight rematch to end them all, and we wanted to know what the fighters sharing the card with Daniel Cormier and Stipe Miocic thought about how it will all play out.

"Hopefully everybody comes out OK, and it's an entertaining fight."

“I think a lot of people are sleeping on Stipe. I don’t know who is going to win. For me, I look at all of these fighters, I look at them as people, and I’m trying to put myself in (their) position because I thought about this a lot because I’m a fan of DC and Stipe. I put myself in the position of where Stipe is in life and where DC is in life. DC has a lot of hype behind him, and he’s doing a lot of commentating, and he’s probably on the road a lot, and I see Stipe, who I think is a firefighter and has a full-time job, so I see him and I think, ‘How much better is he getting?’ So for me, because the first fight was close, even though DC hit him, it was a close fight, and Stipe had his moments for sure in that round. I’m not sure who is going to win. I think a lot of people are sleeping on Stipe right now because of all of the hype DC has got behind him going, but I don’t know. People are sleeping on Stipe.”

“I know Stipe, he want it. I know he want it. Out of all the fights – I was just reminded that Yoel is fighting – I know Stipe want this. I’m going to really be watching. (Cleveland area code) 216, and I’m happy for him, and I’m excited. Let’s get this win. I get the win, he gets the win, and we celebrate.”

“I like Daniel Cormier. I like Stipe. I like them both. Stipe was one of the most dominant heavyweights. Daniel Cormier is just a great dude. He’s doing a lot of good things outside the cage. I admire that because that’s someone I want to be, but his gym, AKA, was ranked above us (Factory X) last year. They were No. 1, we were No. 2, so we’re taking that No. 1 spot this year, so obviously I’m pulling for Stipe.”

“Anyone who can confidently pick is a liar. Even though Stipe got finished, it wasn’t like he was getting out-classed before it happened. It was a pretty tough fight, and it’s heavyweight, man. Anything happens at heavyweight. The only reason why I might lean toward DC is because he won the first one, but I’m not counting out Stipe at all.”

“Everybody, they can’t wait for this fight because this is the bomb. Stipe Miocic – everybody knows this guy. I love this guy because he never goes down. He never gives up. I remember when he lost to (Junior) dos Santos, and the people said, ‘We will give you the chance for a rematch,’ and he said yes and won the fight. Everybody saw what happened. And for the other side, you have the big guy, right now the best fighter of the year, my friend, DC. I know very well, this guy. DC is very competitive. Very competitive. He’s a good guy. Very good person. I have a good respect for him… I know him very well. I’m telling you, Saturday night. We can see (an) amazing fight… Two warriors. They’re really two warriors. Saturday night, we’re blessed because we can talk in the future that we saw the fight – DC-Stipe Miocic 2. This is the blessing.

“That’s a good one. It’s just hard to deny Daniel Cormier. He’s good f****** everywhere. I think it’s going to go the same way. Stipe is going to come out, put some pressure on him. He’s going to beat him for probably the first two minutes, and then I think Cormier is going to use his wrestling a little bit. Change it up, get him a little tired, strike with him and then take him down and finish him this time.”

“I think it’s a very interesting matchup. We got to see just a little glimpse of it last time, and obviously, it was over pretty quick. I think it’s going to kind of play out similar. I think DC is just coming from the lighter weight. I think the heavyweight guys are just a hair slower, and that was what kind of gave Stipe a little problem last time, so I think that’s kind of be the same thing. DC is as tough as they come, and he’s always done good against big punchers, so I don’t see him getting hit with a big right hand that Stipe hits everybody with, so I think he’s just an overall better mixed martial artist.”

“I don’t have a prediction on this one. I like Stipe, and I like Cormier, so this is a really hard pick for me. I’m just really looking forward to watching it.”

“It’s an amazing fight, and I think they’re both amazing humans. It’s kind of one of those fights for me personally that I wish somebody didn’t have to lose. Stipe is with a firefighter background. I’m a paramedic, came from the fire academy, did that for a long time, and so that’s something. And then DC is DC, and I think he’s great. I think he’s awesome. I root for him all the time, and I’m just sad somebody loses.”

“I will tell you, Stipe is from Ohio and stuff. My training partner would go up there and work with him and stuff, so I know him. He’s a Tri-State boy, but I tell people all the time, I think DC is like Majin Buu from Dragonball Z. That dude is dangerous, and I saw him in the locker room today. He gave me some real good advice. He’s just chill and laid-back. I don’t see anyone beating him. I just don’t. He’s Majin Buu. You can’t beat that dude.”

“This fight with DC and Stipe I think is going to turn out the same as the last fight. I support my team captain, who is DC, and for sure, he wants to win again.”

“It’s crazy. So, the first fight, I actually picked Stipe to win it, and then DC pulled it off, and then I saw Stipe in person, and I was like, ‘Whoa, this guy is humongous.’ I want to say Stipe, but DC already won, so I got no prediction. I’m neutral.”

“I think Stipe is going to take this one. I thought the last one was a little bit of a fluke. Not to take anything from Daniel Cormier because he definitely landed that very, very clean, and I think Stipe underestimated him a little bit”

“I’m going with my boy DC. This time, I think he’s going to wear Stipe out, take him down a lot more, maybe get a rear naked (choke) in the third (round).

Kyung Ho Kang (through a translator):

“DC is going to win by knockout.”