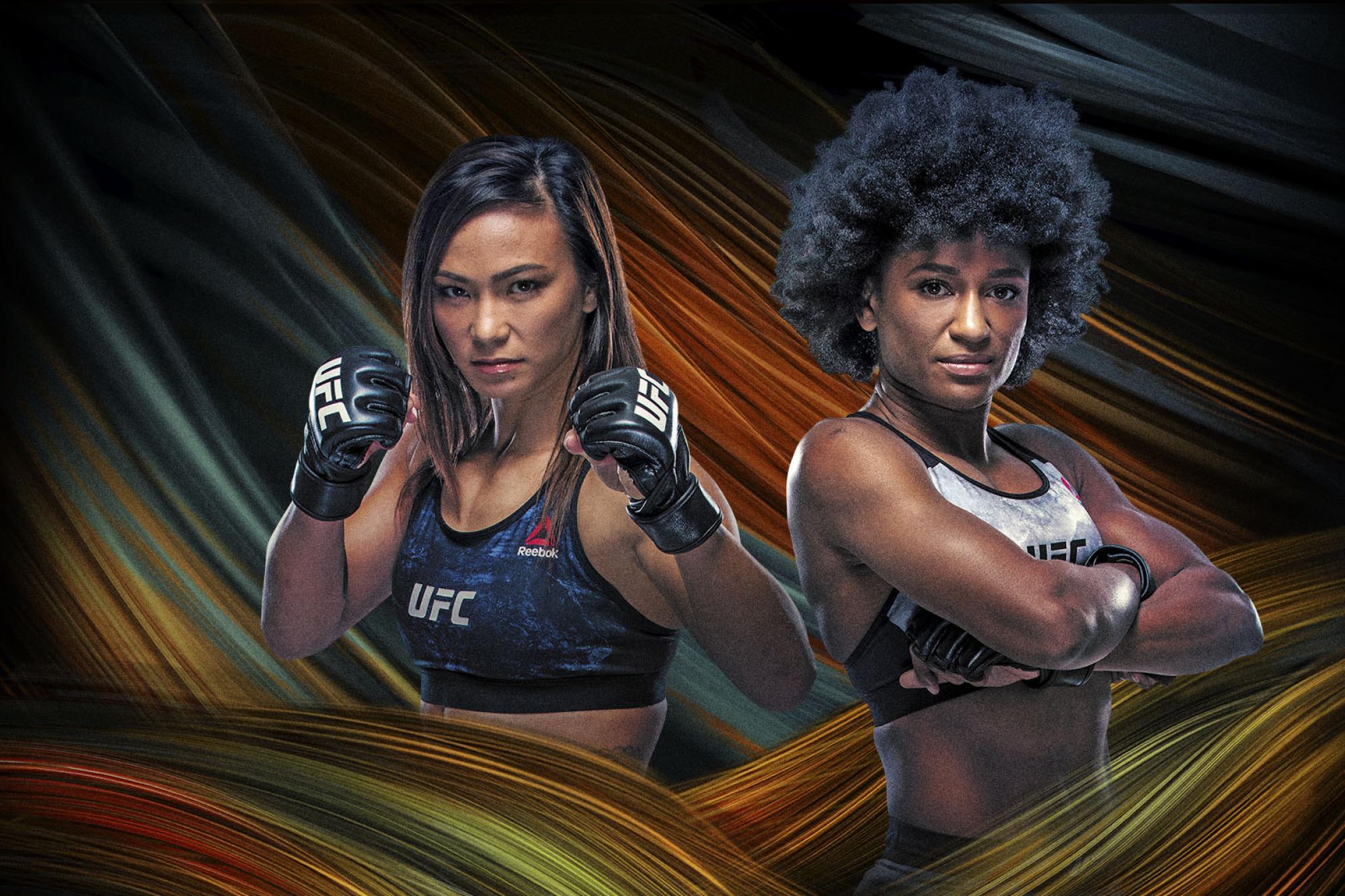 Mazo came out firing head kicks at Kish, one of which jarred the former TUF competitor. But Kish shook off the effects of the blow and fired off kick combinations to the legs of Mazo and broke open a close round in the final minute with a takedown.

Keeping the pace high, Kish took the second round behind a varied array of strikes that she mixed up beautifully, not allowing Mazo to get in any kind of consistent offensive rhythm, despite staying busy.

Mazo regained the lead early in the third, scoring effectively with her kicks to the head and legs. And as she kept the pressure on, she landed another right head kick that dropped Kish, and as Kish tried to recover, Mazo took her back and sunk in the rear naked choke that produced a tap out at 3:57 of round three.

Back in action for the first time since June 2019, Bryan Barberena fought another one of the fights he’s known for, going back and forth with Anthony Ivy before pounding out a three-round unanimous decision in their welterweight bout.

Barberena and Ivy battled it out at close quarters for most of the first round, Ivy having his moments, but Barberena’s veteran experience and more effective work was likely the deciding factor.

Ivy went after the takedown again to start the second, but Barberena defended well and landed hard shots in response. Eventually, it was clear that those shots were taking their toll, and “Bam Bam” knew it. But just when it looked like he was pulling away, Ivy would fire back, refusing to go away quietly.

Getting a takedown a minute into the final round, Ivy got the third off to a positive start. Barberena got back to his feet a minute later, and he pressed the action while avoiding another takedown from the Texan. Down the stretch, the two traded, Barberena holding the edge, but Ivy hanging tough before he scored two more takedowns.

Originally scheduled to face Thiago Moises last weekend, Jalin Turner found himself in a fight tonight and he made the most of it, submitting Brok Weaver in the second round of a 165-pound catchweight bout.

Turner, who replaced Frank Camacho this week, rocked Weaver with the first left hand he threw, prompting the Alabama native to look for a takedown. Turner defended the attempts well and made his foe pay with counters, one drawing blood from the nose. With a little less than a minute to go, a right hand from Turner dropped Weaver, and while Weaver recovered and got a brief takedown before the end of the frame, it was a dominant round for “The Tarantula.”

Turner continued to control matters in the second, knocking Weaver down again with a minute and a half yet. Turner let Weaver up, but as soon as he did, he put him back on the mat, and this time, he locked in a rear naked choke that forced Weaver to tap at 4:20 of round two.

Romanov got the fight to the mat in the opening minute, and while Martinez rose to his feet, Romanov slammed him down and kept the pace high, even with Martinez refusing to stay grounded for long. With a little over three minutes left, Romanov got the takedown and this time Martinez wasn’t able to stand immediately, opening the door for a punishing array of hammerfists and an arm lock, both of which nearly brought a halt to the bout.

It took just 30 seconds for Romanov to return Martinez to the mat, and the dominance continued, with more hammerfists followed by a head and arm choke that prompted a tap out from the Guam native at the 4:22 mark of round two.

In his 33rd professional fight, Kansas City’s Kevin Croom finally got his shot to compete in the UFC and he made the most of it, submitting hot lightweight prospect Roosevelt Roberts in less than a minute.

Croom dropped Roberts with a hard left hand seconds into the fight, and he pounced, locking in a tight guillotine choke that forced the Florida native to tap out at 31 seconds of round one.

A slugfest broke out seconds into the fight and Avila held the edge, prompting a clinch and a slam from Eubanks. Avila worked her way back to her feet and they traded positions while grappling against the fence, Avila eventually getting a takedown. And while “The Raging Panda” held position, late in the round Eubanks did some effective work to finish the round strong.

Avila held the edge as the two slugged it out again to kick off the second stanza, but a caught kick led to an Eubanks takedown, and “SarJ” went to work, locking in an arm triangle choke. Avila got out of trouble there, but then Eubanks took her foe’s back before another arm triangle attempt. Again, Avila got loose, but it was a massive round for Eubanks.

In the second minute of the final round, Eubanks got the fight to the mat, and while she didn’t put Avila in any deep trouble, she did control the action until the horn, wrapping up a clear-cut victory on the scorecards.

Featherweight up and comer Billy Quarantillo got better and better as his bout with Kyle Nelson progressed, culminating in a third-round knockout victory.

Nelson fought a disciplined first round, scoring effectively with his striking and grappling attacks. Quarantillo did score a takedown with a little over a minute, though, closing the gap on the scorecards before the horn.

Getting into a battle in the trenches in the second, it was Quarantillo pressuring his foe and making it into a grueling fight in his favor. By the end of the round, Quarantillo was in total control and Nelson looked exhausted, and as the third started, a single right hand dropped the Canadian and ended the bout. The official time of referee Marc Goddard’s stoppage was :07 of round three.

The summer of Bobby Green continued, as the veteran lightweight won his third fight in row, following up a June victory over Clay Guida and an August win over Lando Vannata with a shutout three-round decision over Alan Patrick.

Patrick (15-3) rushed Green in search of a takedown, and while he got to the mat, it was Green landing in the top position. Patrick got up and kept looking for a takedown, but Green slammed his foe to the canvas. After the two stood, Patrick didn’t stray from his game plan, but it was Green scoring all the takedowns and owning the round.

After Green (27-10-1) kept dominating the grappling exchanges, Patrick decided to try his luck on his feet in the second stanza, but “King” remained a step ahead throughout the middle five minutes.

The Brazilian had a couple positive moments in the final round. but not nearly as many as Green, who cruised to the victory via three scores of 30-27.

Light heavyweight Mike Rodriguez appeared to be on the verge of a second-round TKO win when he faced veteran Ed Herman, but a missed call by referee Chris Tognoni gave “Short Fuse” a second life in the bout, and he used it, submitting Rodriguez in the third round.

Rodriguez fought patiently and effectively in the opening round, landing a variety of strikes throughout. Herman had sporadic success in the clinch, but a big left elbow by Rodriguez with 1:30 left rocked “Short Fuse” and was clearly the biggest shot of the frame.

With three minutes left in round two, Herman finally got a takedown, but Rodriguez didn’t stay long, and the two separated midway through the frame, the New Englander landing a thudding kick to the body. Moments later, a knee to the body by Rodriguez dropped Herman, but Tognoni called it a low blow, bringing a momentary halt to the bout. With a minute left, the fight resumed, and Rodriguez went right back to the body, with another knee, this one deemed legal, putting Herman on the canvas just before the horn.

Herman took the bout to the mat to start round three, Rodriguez getting up with no issue. Herman kept seeking the takedown, only to get drilled with a series of elbows that ultimately put him on the deck. Herman hung tough, locking in a kimura, and that produced a tap out at 4:01 of the third frame.

Lee started and finished fast in the first round, but the middle of the frame belonged to Modafferi who used control on the ground to nullify Lee’s offense.

Keeping Modafferi at the end of her strikes in round two, Lee surged ahead, rocking her foe with a spinning back elbow, but Modafferi scored another takedown, albeit with under a minute left.

The third was another close one, Lee controlling the striking but Modafferi scoring a takedown with two minutes left that, coupled with her ground control, allowed her to leave with the hard-fought win.

Morocco’s Ottman Azaitar made it two for two in the Octagon, adding another knockout win to his resume in the UFC Fight Night co-main event as he halted Khama Worthy in less than a round.

After a brief feeling out process, Azaitar and Worthy engaged and the power advantage of the “Bulldozer” was evident immediately, as he briefly rocked Worthy and then unloaded with both hands. After Worthy hit the deck, a series of unanswered right hands brought in referee Herb Dean to halt the bout at 1:33 of the opening round.

Strawweight contenders Michelle Waterson and Angela Hill both showed up at the Apex in Las Vegas to put on a show in their main event Saturday night, and they did just that for 25 minutes, with Waterson eking out a hard-fought five-round split decision.

Hill threw with bad intentions from the start, aiming to not just take an early lead but secure an early night. Waterson took the shots well, and after a couple grappling sequences came up empty, she tried to implement her striking game while dealing with a mouse under her right eye. With less than two minutes left, Hill showed off her grappling defense, keeping Waterson at bay before going back to working her strikes.

The action heated up in the second, Waterson having more success with her strikes while Hill continued to stay busy. Midway through the round, a right hand from Hill rattled Waterson, but the Albuquerque product bounced back quickly, getting in some more shorts before the round ended.

After taking some more shots and getting her nose bloodied, Waterson finally got her takedown a minute and a half into round three, and she immediately went to work, taking the back with under two minutes left. Hill scrambled out of trouble, but she remained on the bottom with Waterson firing strikes from the top position.

Waterson was clearly looking for another takedown early in the fourth, but Hill was able to stay standing as she fired off strikes. Waterson adjusted well, switching back to her standup game, and that tightened the bout even more. And while the takedowns – or the lack of them – were a key scoring point early on, Waterson’s ability to adapt was slowly taking them out of the equation.

With the bout possibly on the line, both fighters showed a sense of urgency as the fifth round opened, each getting shots in, and as the clock ticked down, Waterson began pulling ahead with fast punches and kicks, only to be answered by Hill, who roared back, setting up a series of heated exchanges until the final horn.