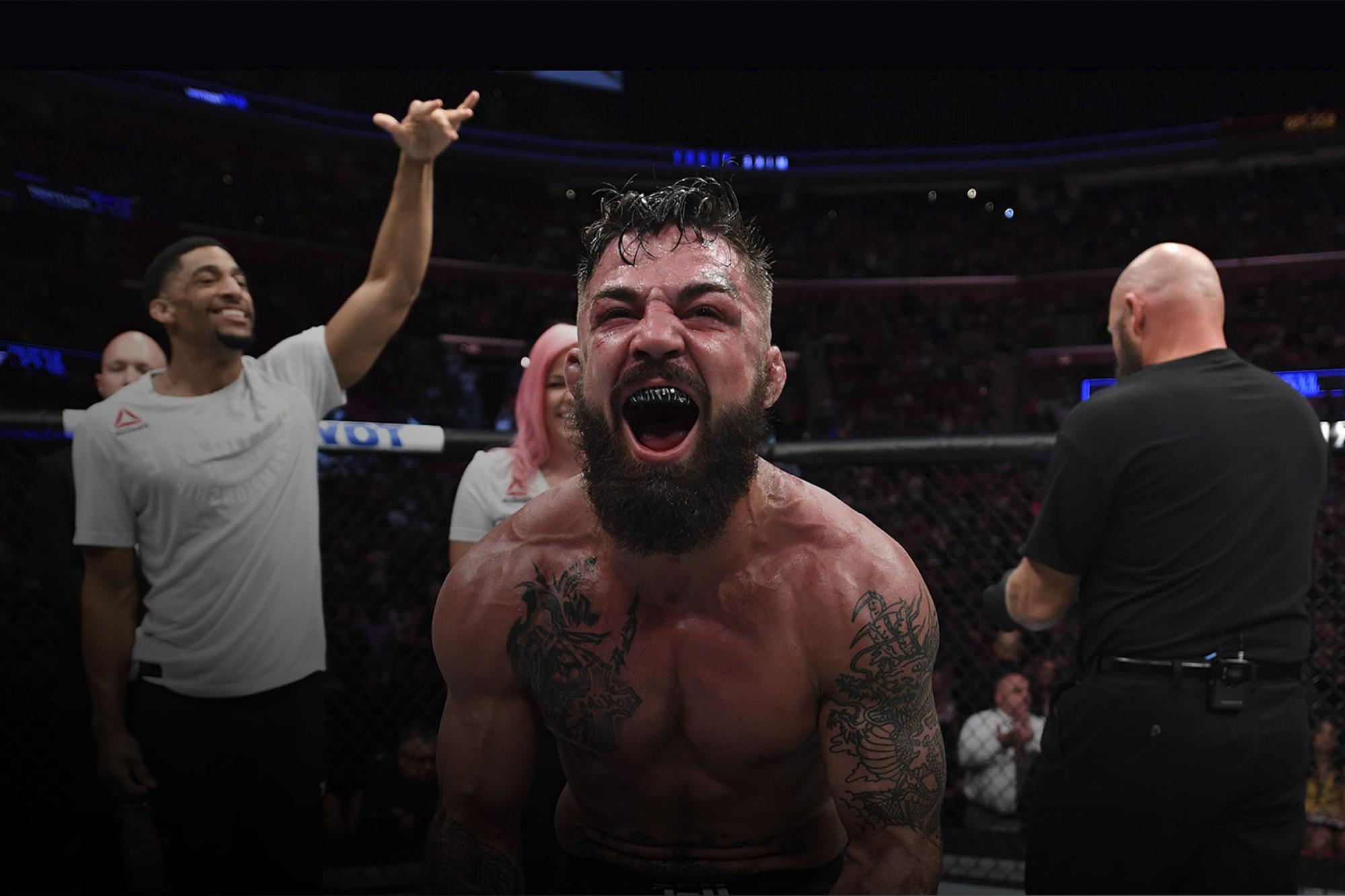 The Talking Points and Bonus Winners of UFC Fort Lauderdale
By Zac Pacleb • Apr. 28, 2019
Fight of the Night:
Mike Perry vs Alex Oliveira

Sometimes, things work exactly how you think they will.

Heading into fight night, the general consensus had this fight as a Fight of the Night favorite, and it delivered in every possible way outside of a finish.

The two shared energetic walkouts, dancing like they were on South Beach instead of about to do battle, but once the fight got going, all their energy went into the fight.

Oliveira hit “Platinum” Perry early and often in the first round, but not without absorbing damage himself. “Cowboy” utilized his wide array of skills to rock and bloody Perry and went into the second round with the lead.

Perry landed a counter-left that staggered Oliveira to turn the tide, following that by tossing the Brazillian awkwardly onto the canvas. Perry continued with high pressure, volume and his signature heavy shots, and Oliveira appeared to hurt his toe late in the round. In the final round, Perry opted to go with a patient, counter-focused approach as both men tired.

“(Oliveira’s) gas tank broke like we thought it would,” Perry said. “He went to waiting for it to come back, and that’s when I let loose on him a few too many times for to come back from it. (I) stayed tough, and then my coach was yelling at me, ‘Don’t push the action, and try to stay patient.’ If I moved, I could get the win. I didn’t have to go too crazy and put myself in a dangerous situation, and I’m sorry for the fans that I didn’t push to the end and try for the KO, but I needed that (win).”

The UFC veteran might’ve been rocked after Ion Cutelaba hit him flush with a spinning backfist followed by heavy ground-and-pound, but Teixeira kept his cool and nearly finished the fight in the first round when he attempted a guillotine.

“(Cutelaba) caught me off-balance,” Teixeira said. “As soon as I hit the ground, I was able to recover good, and I felt that I was good.”

Teixeira hit Cutelaba with a good shot early in the second round, and Teixeira pushed the action while his opponent tried to sit back and counter. As Cutelaba tired, Teixeira got to the ground and secured full mount, then took the back on his way to a rear naked choke. The win improved Teixeira’s record to 29-7, and he reminded people what he can do along the way.

Speaking of veterans, few have been around and as busy as Jim Miller. Making the walk for the 32nd time in the UFC, Miller made quick work of Jason Gonzalez, who was coming back from a 19-month, injury-riddled layoff.

Gonzalez threw hard and fast, but Miller negated any danger by getting the takedown. From there, Miller secured position quickly for the rear naked choke. The win was Miller’s 30th professional victory, and his second in his last three fights.

Taking a fight on short-notice against a next-in-line title contender in Jacare Souza, Jack Hermansson headed into fight night as the definition of “nothing to lose.”

“The Joker” started this fight quickly, and he’s made a habit of looking for a quick finish. After knocking Souza with a couple strong, short punches, he secured a guillotine choke, and flashbacks of Hermansson’s previous two fights came back strong. Souza, to his credit, worked his way out of danger and the fight continued.

“(Souza) has so much heart, and you got to respect that,” Hermansson said. “There were a couple of times in there where I was just like, ‘Man, isn’t he going to stop coming?’ And I wanted to throw hard, and I was very, very close to just standing there and throw out until one of us got knocked out, but my coach was always telling me to continue to move, hit and move, hit and move.”

The fight stretched into the championship rounds, and Hermansson continued a diverse attack of grappling and distance-striking. Souza came on strong in flurries, ripping Hermansson to the body a few times and narrowly missing on multiple haymakers.

In the longest fight of his career, Hermansson closed the show with some good combinations and enough movement to seal the win with a takedown late in the round.

“It is so hard to be disciplined like that for five rounds because it’s easy if you just stand there and think, ‘I want to get out of this. I want to throw and knock him out,’” Hermansson said. “I managed to stay disciplined, and that’s what gave me the victory.”

The win catapults Hermansson into the title-challenging picture with his 20-4 record, while Souza finds himself with another title shot just out of reach.

In another short-notice performance, Angela Hill snapped her two-fight losing streak by winning a strikers duel with Jodie Esquibel. The high-paced fight catered to Hill’s beautiful counterstriking display, even if it meant taking a few good shots from Esquibel.

Esquibel knocked Hill down in the third round, but Hill recovered to secure the unanimous decision victory, making amends for her first-round loss last month in Nashville.

Mike Davis came into his UFC debut with plenty of hype around him, but Burns put that to rest with a strong performance. Using his superior grappling skills, “Durinho” recovered from a few good strikes to put some damage to Davis.

Burns returned the fight to the mat early in the second round, securing Davis’ back. Davis tried his best to escape, but Burns utilized a mixture of open-handed strikes and ground-and-pound to soften the UFC debutant up before securing a rear naked choke.

The strong performance earned Burns plenty of respect while moving his record up to 15-3, and he expressed his desire to cash in on his current momentum by calling out Alexander Hernandez, which would surely turn into a fun fight between young lightweight contenders.

Fight of the Night: Alex Oliveira vs Mike Perry