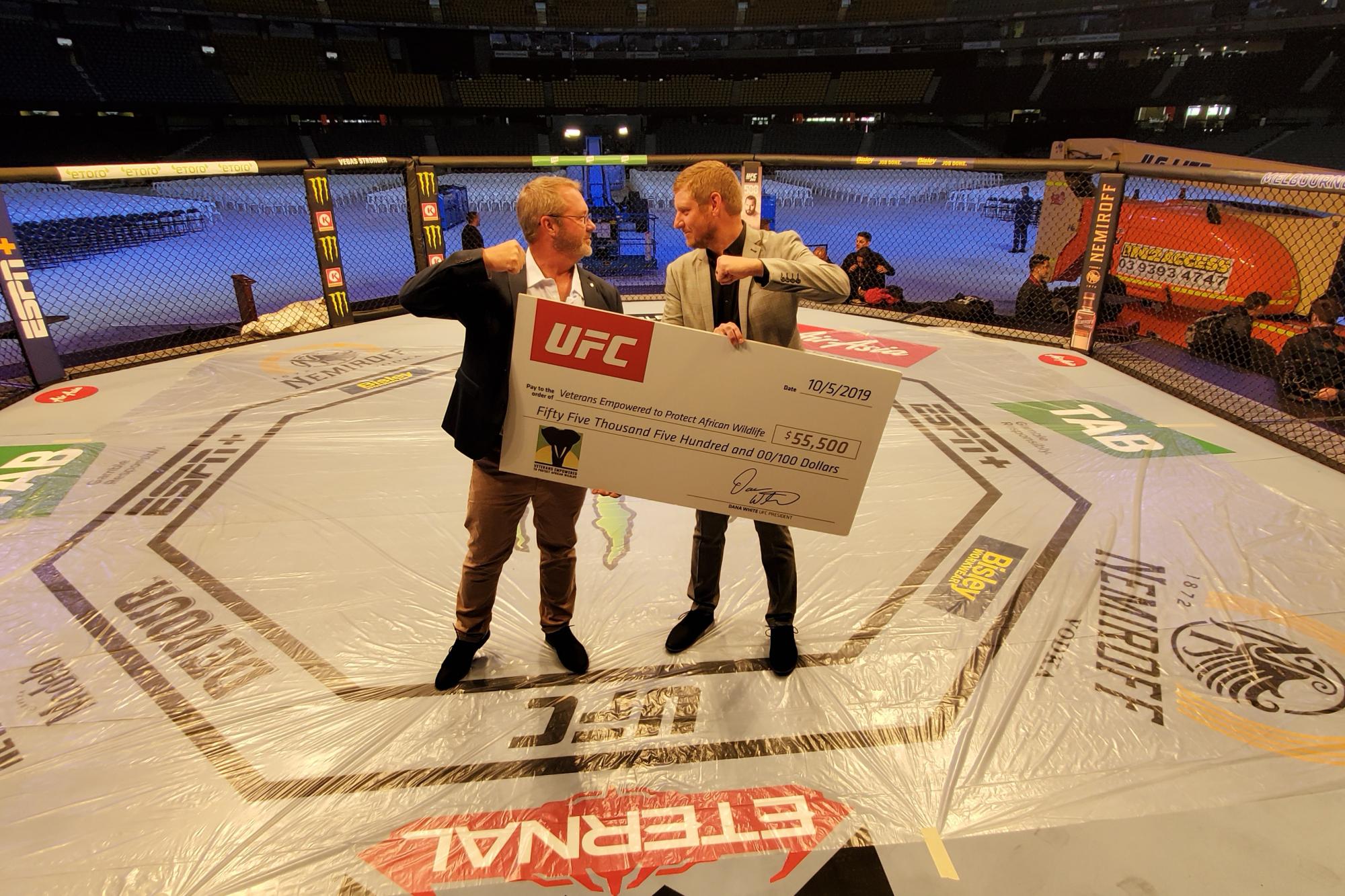 For the biggest UFC event ever in Australia, UFC 243: WHITTAKER vs. ADESANYA, UFC partnered with global experience specialists Omaze to give one lucky fan the UFC VIP experience of a lifetime, while also supporting international charity VETPAW, a non-profit organization that employs U.S. veterans to help save critically endangered and irreplaceable wildlife.

“It was an absolute honor to have received support from Dana White and UFC,” said VETPAW Founder Ryan Tate. “It is a dream come true to have VETPAW’s name associated with UFC.”

The winner of the Omaze campaign, Troy Stencel, a U.S. Navy veteran and active duty fireman in Buena Vista, Colorado, donated $100 for 2,000 entries to win a trip to Melbourne to see his first live UFC event.

Two weeks later, Stencel received a call from Omaze officials letting him know that he was the grand prize winner of the UFC VIP experience. The package included hotel and flight accommodations to Melbourne; two positions on stage during the ceremonial weigh-ins; VIP seats in UFC President Dana White’s personal section;  the opportunity to meet guest athletes;  a one-year subscription to UFC GYM; and a $500 gift card to UFCSTORE.com.

“UFC 243 was an incredible experience,” exclaimed Stencel.  “As I told my family everything we did, I had the biggest smile on my face. Just last week, I responded to an email stating that I was the winner, and the very next day I was on a plane to Australia to go to UFC 243… it was unbelievable.” 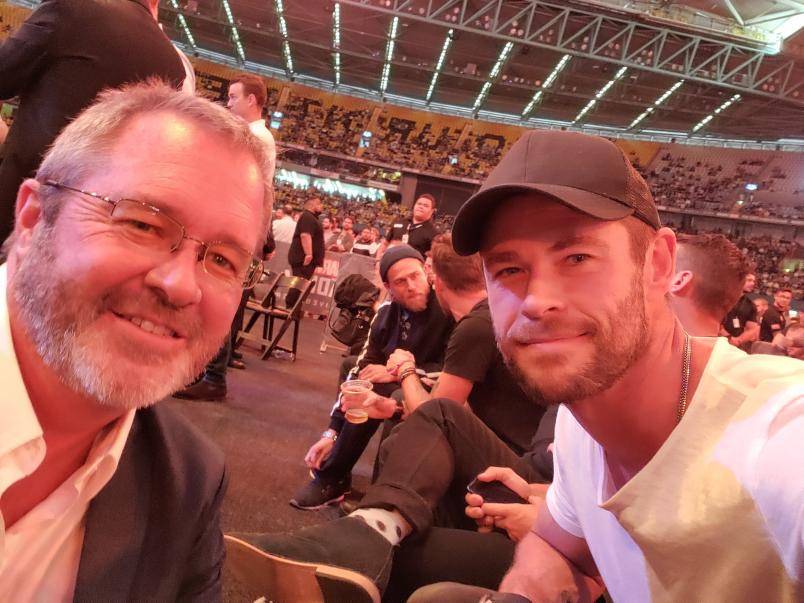 On the eve of the event, Stencel was permitted to stand on-stage during the ceremonial weigh-ins, take a behind the scenes tour of Marvel Stadium, and step inside the Octagon to take photos.

“Being on stage for the weigh-ins, meeting athletes, and sitting with celebrities during the event was amazing,” said Stencel. “I sat near Thor for UFC 243!  My wife even got to talk to [actor] Chris Hemsworth on the phone.” 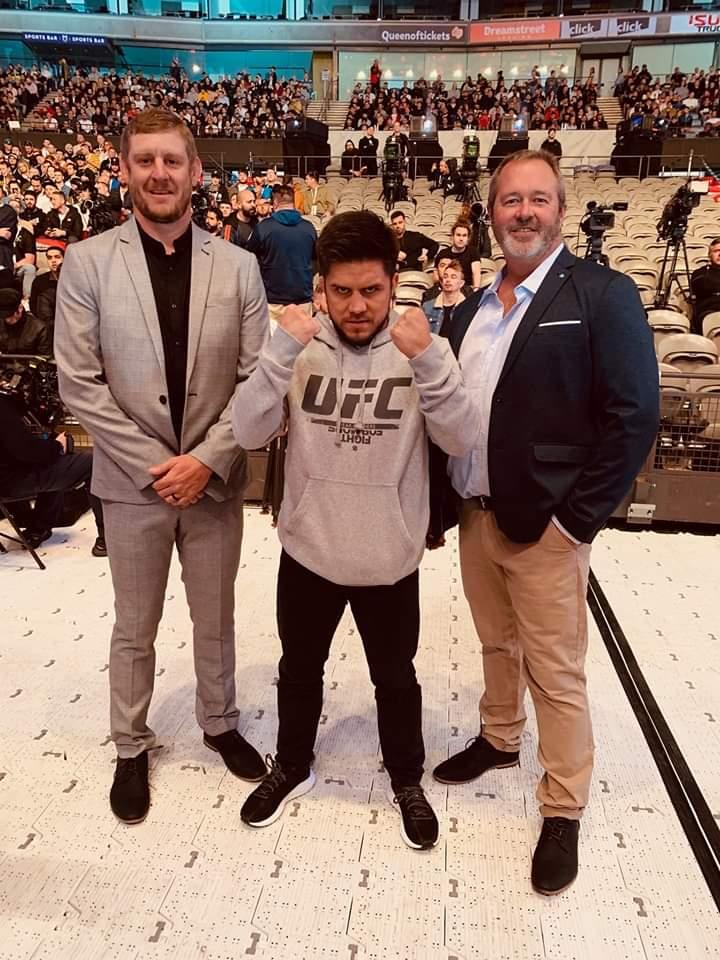 Stencel also presented VETPAW with their $55,500 ceremonial check, the final tally of funds raised during the global campaign.

“The money raised during this campaign helps place veterans on the ground in Africa to continue VETPAW’s mission of stopping illegal poaching of endangered African wildlife,” said Tate. “Our stats show that on average, one elephant is killed every 10 minutes by illegal poaching. There are now less than 25,000 white rhinos and 5,000 black rhinos left in Africa, and we are doing all we can to end this crisis while saving them. These funds will help us continue our fight to save endangered wildlife.”

This is the fifth sweepstakes on which UFC and Omaze have partnered, collectively  raising over $685,000 for various charities, including Make A Wish, National Fitness Foundation, Jared Allen’s Homes For Wounded Warriors, and The Headstrong Project.