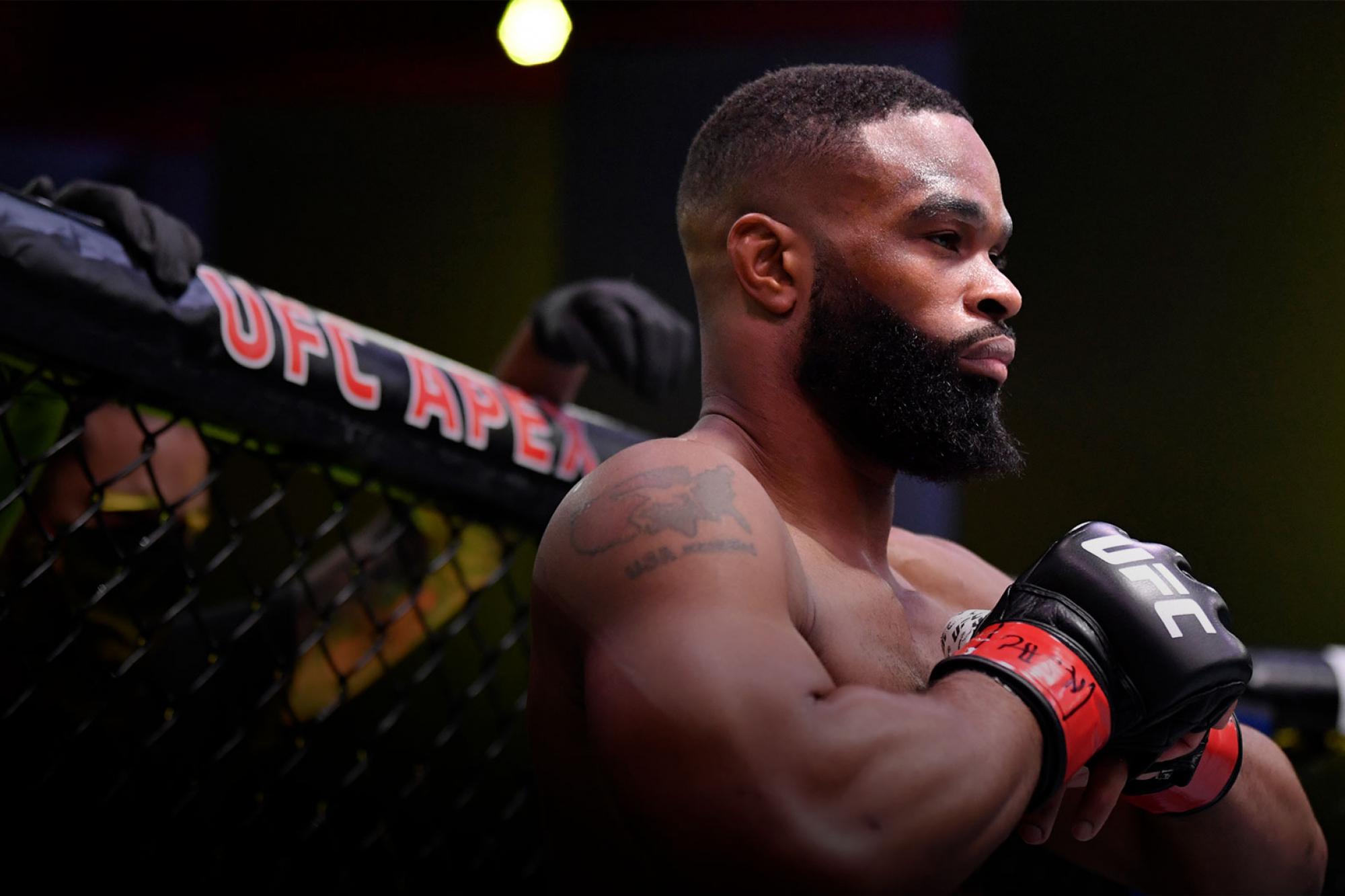 One of the most stacked, non-pay-per-view events of the calendar lands in the UFC Apex on September 19, featuring a hot-headed matchup in the main event that carries with it major implications at the top of the always-dramatic welterweight division. It’s the kind of main event where time seems to slow down during the walkouts with how much anticipation is building into the storyline behind the fight.

Elsewhere on the intriguing card, action is promised in a co-main event that is nearly guaranteed to come to an end before the 15 minutes are through, a star from Fight Island gets his toughest test to date and a competitive middleweight fight could send the winner up into a top 15 matchup next.

To investigate what the matchups might bring viewers on fight night, we dove into the stats to get a clearer picture into an ultra-intriguing fight night.

(All stats according to UFC’s Record Book as of September 16, 2020, and only include active athletes in their respective division unless noted otherwise)

What It Means: Colby Covington sucks the life out of his opponents with his relentless, swarming pressure. His elite wrestling base allows him to grind his opponents into a pulp against the cage, and the best way to describe it is he is just constantly making his opponent work. Whether they’re fighting off a submission attempt, trying to stuff a takedown, trying to get off the mat or just find a window for their own offense, Covington is overwhelming with the pace he sets.

MORE FROM UFC VEGAS 11: Fight by Fight Preview | Fighters On The Rise | Free Fights: Covington vs Lawler | Woodley vs Till

What It Means: The former welterweight king is one of the most explosive fighters in the division. While Tyron Woodley is methodical with how he decides to utilize those explosions, they often come with devastating impact. His overhand right won him many fights, including the title, but at times he can look hesitant. In a blink, he can change the fight, and his wrestling credentials help him really neutralize his any sort of offense from his opponent when he is on his game.

What to Look For in the Fight: Without a doubt, Covington is going to press the action against Woodley, who has shown a susceptibility to wait against the cage for costly amounts of time. It’s what happened in his most recent losses to Kamaru Usman and Gilbert Burns, but the former champ is still dangerous with the dynamite in his hands. He has said that he knows he needs to let his hands go, but whether he finds a window against the swarming Covington is something to note. These two do not like each other, but neither is going to fight out of character just because there’s animosity.

What It Means: No matter what, Donald Cerrone brings an exciting fight along with him. An all-around fighter who loves to throw flowing combinations and rattling head kicks has continued to ebb and flow with the evolution of the sport. “Cowboy” is a bankable combination of fun and high-level skill, and he has seen it all in the Octagon, so it’s common to see him pick up on trends and tendencies in his opponents and make in-fight and between-round adjustments that he cashes in on as the fight matures.

What It Means: “Hybrid” is a fitting nickname in the sense that nobody knows exactly what Niko Price is going to pull out of his bag of tricks next. It’s not that he’s doing anything out of the ordinary, but it’s the timing or effectiveness in unorthodox techniques. With his wiry, long-limbed frame, Price has a quirky rhythm of movement and range, which can give his opponent problems. He doesn’t sit and wait for his chance, but rather seeks it out with near-reckless abandon. The pressure often allows him to fish for a submission or land a strike out of nowhere.

What to Look For in the Fight: This fight almost guarantees fireworks because neither fighter knows much about sitting and waiting for an opening. They make them happen. Price is the wilder of the two, but his offbeat sense of timing and range gets its toughest test yet against the ever-experienced Cerrone, who is trying to stop his four-fight skid. Because Price’s submission game is sound, it’s like this fight will turn into a bit of a madhouse standup fight. Price showed his toughness in his recent rematch against the powerful Vicente Luque, so if things get a little chaotic in the pocket, he might have the advantage in terms of absorbing a shot in order to return with a heavier one.

What It Means: In two fights – in 10 days, mind you – Khamzat Chimaev put the MMA world on notice with ultra-aggressive, mauling performances in which he did not take any damage. So far, his game plan has been to bullrush his opponent, get them to the mat, and then throw a never-ending storm of ground-and-pound. Pauses only come when he blankets his foe and prevents them from getting up, and he is keen to find a submission as well if the window presents itself.

What It Means: “GM3” is as slick as they get on the ground and he has a penchant for finding a submission out of nowhere. He’s also adept at setting his opponent up to fall into a trap so he can sweep and continue his grappling attack. His overall offense has improved as well, and his blend from striking to grappling makes him a difficult opponent for more single-minded opponents. With 44 professional fights under his belt, he is as experienced as they come and is leaning into playing spoiler against Chimaev’s rising star. Since entering the UFC in 2016, he has hung right outside the top 15, dropping fights almost exclusively to fighters either in the same range or in the top of the weight class.

What to Look For in the Fight: Chimaev was probably the biggest winner coming out of Fight Island, gaining notoriety not only for picking up a pair of wins in a record-breaking time frame but also with his “smashing” style that drew quick comparisons to Khabib Nurmagomedov. While his wins were impressive, Meerschaert is his toughest test by a long shot, so if the veteran can provide some resistance, it will be interesting to see how Chimaev can adjust on the fly. Meerschaert is dangerous off his back and can take advantage of an overly aggressive fighter, but Chimaev, to this point, has shown that he might have a little extra something that makes him a potential contender sooner than later.

What It Means: The chatterbox that is Kevin Holland continues to show he has the skill set to back up his penchant for in-fight talking. Always game to step in on short notice, Holland’s striking makes the most of his 6-foot-3 frame and 81-inch reach. He utilizes a nice mixture of front and roundhouse kicks to the body and legs to throw off his foe’s timing, and as he has gained more experience, he has become more efficient as well. His last fight showed a good balance in activity and precision, picking his shots while still keeping pressure on high. He has a tricky jiu-jitsu game as well, always ready to fish for a submission either off his back or in a controlling position.

What It Means: Darren Stewart is a well-rounded, aggressive fighter who has continued to improve each time he steps in the Octagon. Mostly holding a reputation as a technical standup fighter, Stewart has rounded out his game nicely in order to help keep the fight in the space and tempo that he best likes to work. After a rocky start to his UFC career, Stewart has won five of his last seven fights, including a first-round submission win in his last outing about six weeks ago. He has the skills and awareness to shut down his opponent’s attack and find his own openings and isn’t afraid to make the fight a bit of a grinder.

What to Look For in the Fight: If Kevin Holland keeps things at a distant range, he’ll likely be dictating the tempo of the fight and finding more success. He is an aggressive striker when he opens up, but Stewart isn’t any sort of slouch on the feet either. He mixes in some grappling pretty well too, so if one fighter starts to find some momentum in the striking department, don’t be surprised if there’s a few clinch situations on the fence that could get tricky with Holland’s submission game as well.