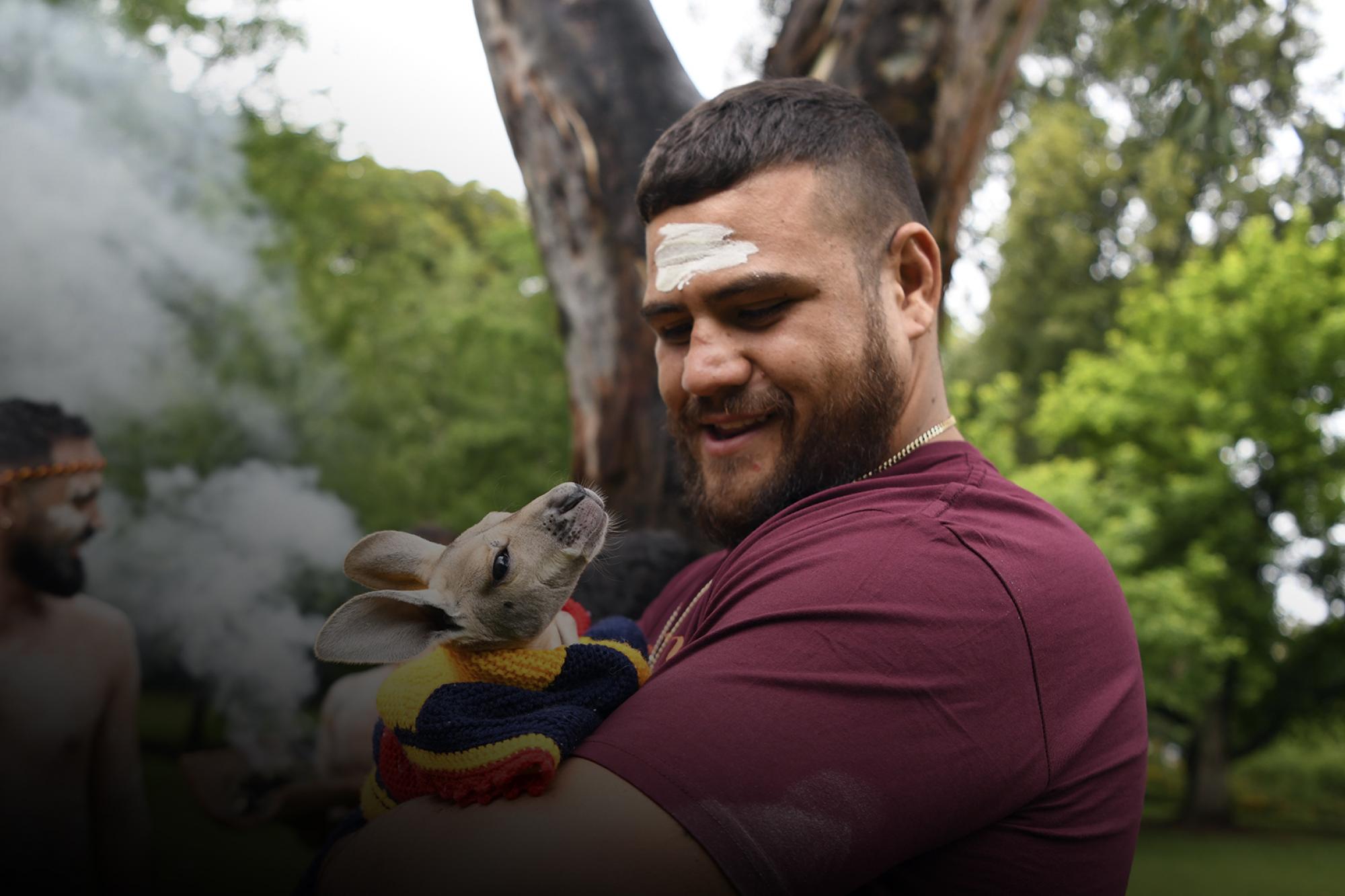 The card at the Adelaide Entertainment Centre will be a milestone for both men: Tuivasa’s first UFC main event, and what may be Hunt’s final fight in the UFC. Yet the two have shared their training camp as Hunt prepared for his fight against Justin Willis.

“He (Hunt) said, ‘This camp’s your camp, this is your fight, all the help is there, all the boys are here.’”

Hunt is making way for his successor. The two share Samoan ancestry and call Western Sydney home, making Tuivasa a logical replacement for Hunt in the UFC’s heavyweight division.

“That’s what he’s saying; he’s putting me first. That’s what we do (in our team). He’s letting me take the horns.”

Tuivasa hopes to repay his mentor’s selflessness with a win over Dos Santos. A former UFC heavyweight champion, “Cigano” holds a hard-fought 2013 knockout win over Hunt, a fact that “Bam Bam” says has long motivated him to fight the Brazilian.

“That was the number one reason to fight him.  That was my number one motive behind the whole fight,” said Tuivasa. “Yeah, I’ve always wanted to fight him. I was there when (Dos Santos) beat Mark. Obviously, I wasn’t in the UFC and I wasn’t planning on being in the UFC at that time. But now we’re here and we get this opportunity, so I’m gonna grab it with both hands.”

Hunt doesn’t have any secrets learned from his battle with “Cigano” to impart, but Tuivasa believes there is no magic formula for victory against his fellow knockout artist.

“Mark and I don’t sit down and say do this, do that,” said Tuivasa. “It’s simple, it’s really simple.  Just train hard and go out there and do my thing. This guy’s not better than me; he’s just been around longer than me, that’s all.”

A win over Dos Santos will also put Tuivasa a step closer to the goal that Hunt came agonizingly close to: UFC gold. But Tuivasa doesn’t think he’s ready for that just yet.

“In MMA itself you can learn something new every day, there’s always a little trick you don’t know, but for me to become a champion, I want to learn a couple more things, just get a bit better with my wrestling and (learn) a bit more jiu-jitsu,” said the 25-year-old. “But, a couple of years or a year and a bit and we can be right up there (in title contention); I just want to earn some money and see my family for now.”

A rarity for both fighters has been the war of words between them. Neither man ordinarily engages in smack talk. Yet it began after Dos Santos criticized Tuivasa for being a self-described “street fighter,” a title “Bam Bam” makes no apologies for.

Tuivasa has since taken his share of shots at the 34-year-old Dos Santos on social media.  The light hearted posts and Tuivasa’s relaxed attitude to their feud make it unclear whether “Cigano” is really under his skin.

“A little bit of fun on Instagram never hurt anyone. At the end of the day it doesn’t really matter what I say or what he says, or what I post or what he posts. We’re going to meet each other in the middle of that ring, so that’s where it all goes down.”

What is clear is that motivation for this fight is no issue for Tuivasa, who struggled with the will to prepare earlier in his career.

“I haven’t really trained this much ever, or been into fights this much. I’ve never been this active since my career started. I just feel I’m getting better and better each time,” he said. “I’m picking up new tricks each time, I’m really fresh and I’m just working on my game. But I suppose I’ve gotta work on it quick when I’m dealing with guys of this caliber, legends of the sport.”

The No. 11-ranked Tuivasa returns to the Octagon after a unanimous decision victory over former champion Andrei Arlovski at UFC 225 in June..

The No. 7-ranked Dos Santos has only lost to former champions Stipe Miocic and Cain Velasquez since making his UFC debut.  His last fight was a five-round unanimous decision victory over Bulgaria’s Blagoy Ivanov in the main event of UFC Fight Night 133 in July.

Tuivasa is out to prove that Dos Santos now belongs to the old guard.

“I think he’s an awesome fighter, it speaks for itself; he’s become the champion and anyone who becomes champion of the UFC is a great fighter,” said Tuivasa. “But he’s had his time, he’s had his run at the top, it’s time for the young gun to move him out the way.”

Tuivasa’s fight against Arlovski proved that he can go the distance.  But Tuivasa, whose other wins have all come via first round KO, isn’t looking to take his legendary opponent into deep waters.

“My prediction, I don’t think it’s going to go past the first round. It’s either gonna be me or him. I’m all in or nothing.”