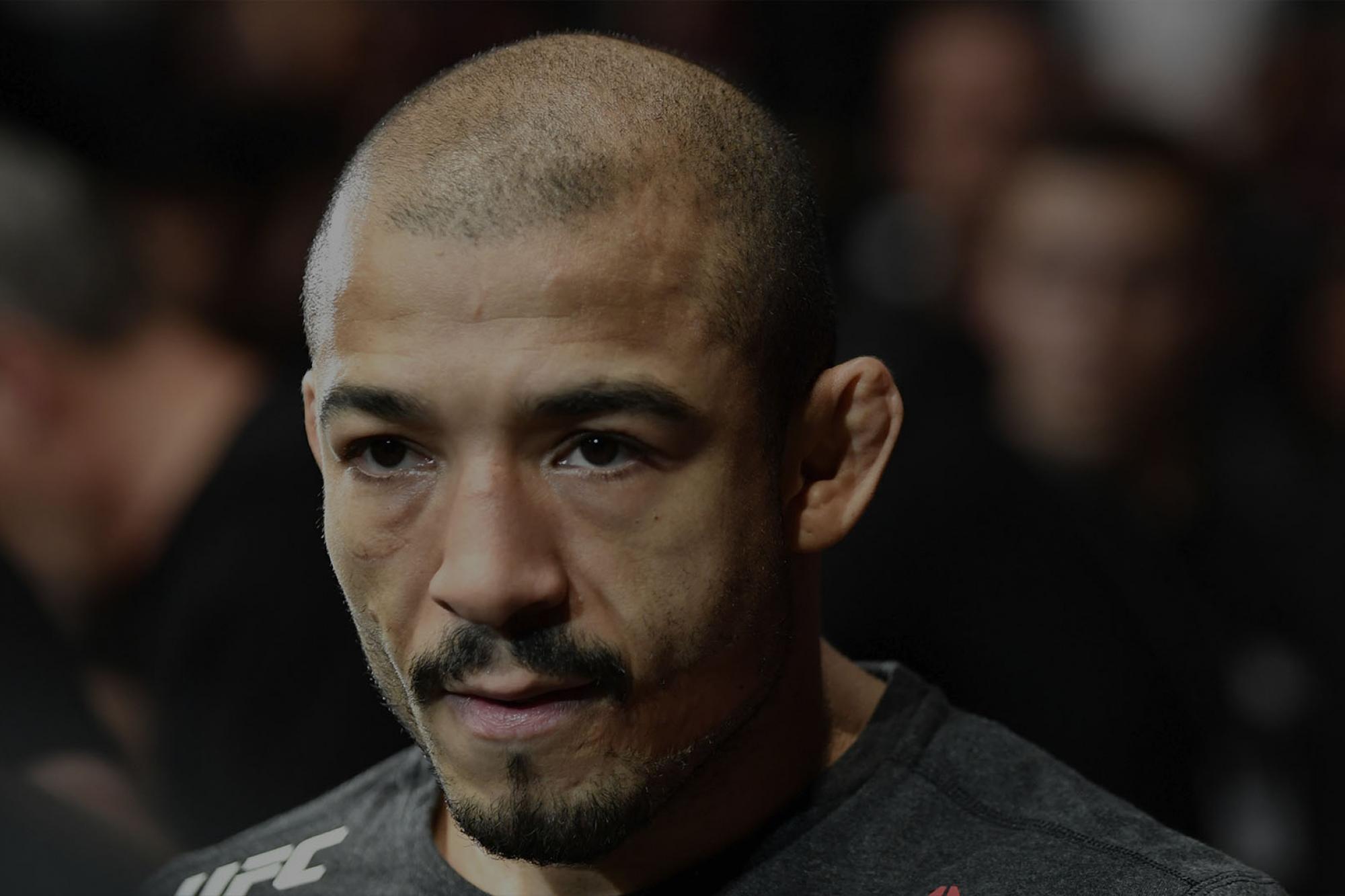 In this edition of the Super Six, we look back at the best moments from one of the greatest UFC fighters in history: Jose Aldo
By Thomas Gerbasi • Dec. 15, 2020

Jose Aldo is the first man to hold the UFC featherweight title and widely considered to be one of the greatest fighters to ever emerge from Brazil. Now on the hunt for a second world title, this time at 135 pounds, Aldo will look to keep those dreams alive on Saturday when he faces Ecuador’s Marlon Vera in Las Vegas. And while it’s tough to whittle an epic career down to six spectacular fights, we gave it shot. 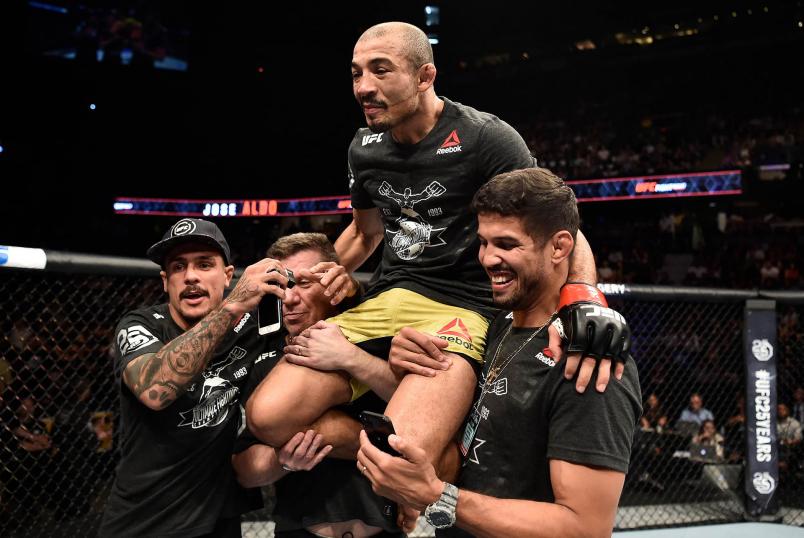 Jose Aldo of Brazil celebrates after his TKO victory over Jeremy Stephens in their featherweight bout during the UFC Fight Night event at Scotiabank Saddledome on July 28, 2018 in Calgary, Alberta, Canada. (Photo by Jeff Bottari/Zuffa LLC)

June 7, 2009 - TKO1 Cub Swanson (watch on UFC FIGHT PASS)
Aldo didn’t get thrust into a title shot after his debut WEC win over Alexandre Nogueira in June of 2008. Instead, he was moved in a masterly fashion, pitted against solid competition that was expected to test him if not for the fact that Aldo made them look ordinary. Three consecutive knockouts of Jonathan Brookins, Rolando Perez, and Chris Mickle made him a must-see for WEC fans, but it was going to be veteran Cub Swanson that was going to be the fighter to push Aldo harder than he had been pushed before in the WEC. Didn’t happen. Aldo came out at the opening bell and landed not one flying knee, but two in quick succession, sending Swanson down to the mat grasping his face, which was sliced open by the assault. The fight took all of eight seconds.

November 18, 2009 - TKO2 Mike Brown (watch on UFC FIGHT PASS)
After his destruction of Swanson, there was no question that Aldo’s next step was to be a world title fight, but the man at the top in November of 2009 wasn’t Urijah Faber, but seasoned veteran Mike Brown. And most assumed that while Aldo was young, explosive, and fast, Brown had those intangibles that were going to force the Brazilian to dig deep to pull out the victory. But yet again, Aldo was a step ahead all night, pounding out a second-round TKO win that earned him the WEC featherweight title. Without a doubt, he had proven himself to be the top 145-pound fighter in the world, but there was still a man waiting in the wings who wanted to stake his claim on that title – Urijah Faber.

April 24, 2010 - W5 Urijah Faber (watch on UFC FIGHT PASS)
Perhaps the biggest featherweight fight ever at that time, Aldo vs. Faber captivated fight fans around the world, yet like his countryman Anderson Silva had to do in his rematch against Rich Franklin, Aldo had to travel to Faber’s hometown of Sacramento to announce his true arrival on the world stage. This time though, he didn’t win with a spectacular knockout. Instead, he punished Faber for 25 minutes, banging up his legs with vicious kicks that rendered “The California Kid” nearly helpless. In the aftermath of the shutout five-round win for Aldo, much of the attention focused on Faber’s gritty effort in defeat, but what should have also earned equal, if not more, billing was Aldo’s disciplined and dominant performance, one that made it clear that at 145 pounds, there was Jose Aldo and everyone else.

February 2, 2013 – W5 Frankie Edgar (watch on UFC FIGHT PASS)
Following the Faber bout, Aldo knocked out Gamburyan in his final WEC bout and was then named the UFC’s first featherweight champion November of 2010. His first defense was in April of 2011, a victory over Mark Hominick, and two more successful defenses against Kenny Florian and Chad Mendes followed. In short, it was business as usual for Aldo, but when matched up with former lightweight champion Frankie Edgar in February of 2013, the Brazilian got pushed to the limit by the scrappy New Jersey native. Not that he needed to prove himself at this point, but if there were any doubts about his ability to win a back-and-forth dogfight, Aldo silenced them with his close, but unanimous, decision.

Watch Saturday With Your ESPN+ Subscription

October 25, 2014 – W5 Chad Mendes (watch on UFC FIGHT PASS)
The first time Aldo met Chad Mendes in 2012, the bout ended by knockout in 4:59 and was best remembered for the champion running into the crowd after the fight to celebrate with his fans in Rio de Janeiro. The rematch was an entirely different story, with the top two 145-pounders in the world going toe-to-toe for much of the 25-minute bout. In what was perhaps the greatest featherweight title fight in history, Aldo got a well-deserved unanimous decision victory, but he had to dig deep to get it, proving once more that whether he’s dominant or forced to show his championship heart, he is the best featherweight ever. 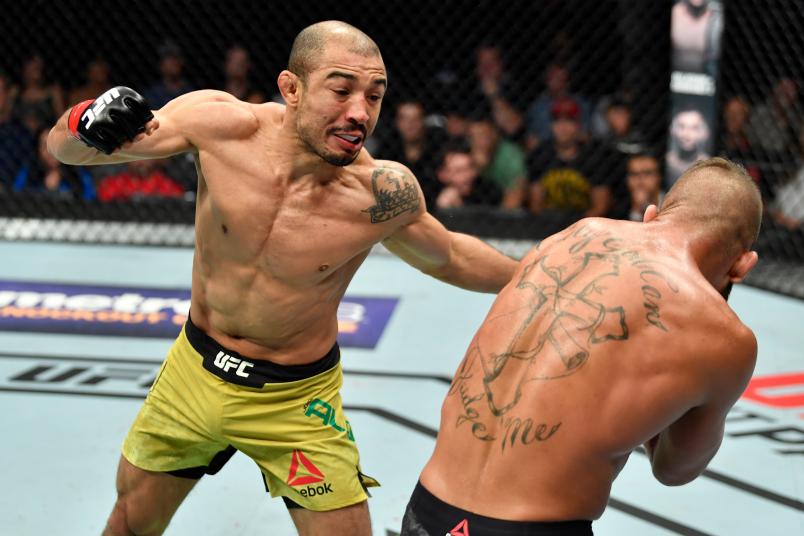 Aldo of Brazil punches Jeremy Stephens in their featherweight bout on July 28, 2018 in Calgary (Photo by Jeff Bottari/Zuffa LLC)