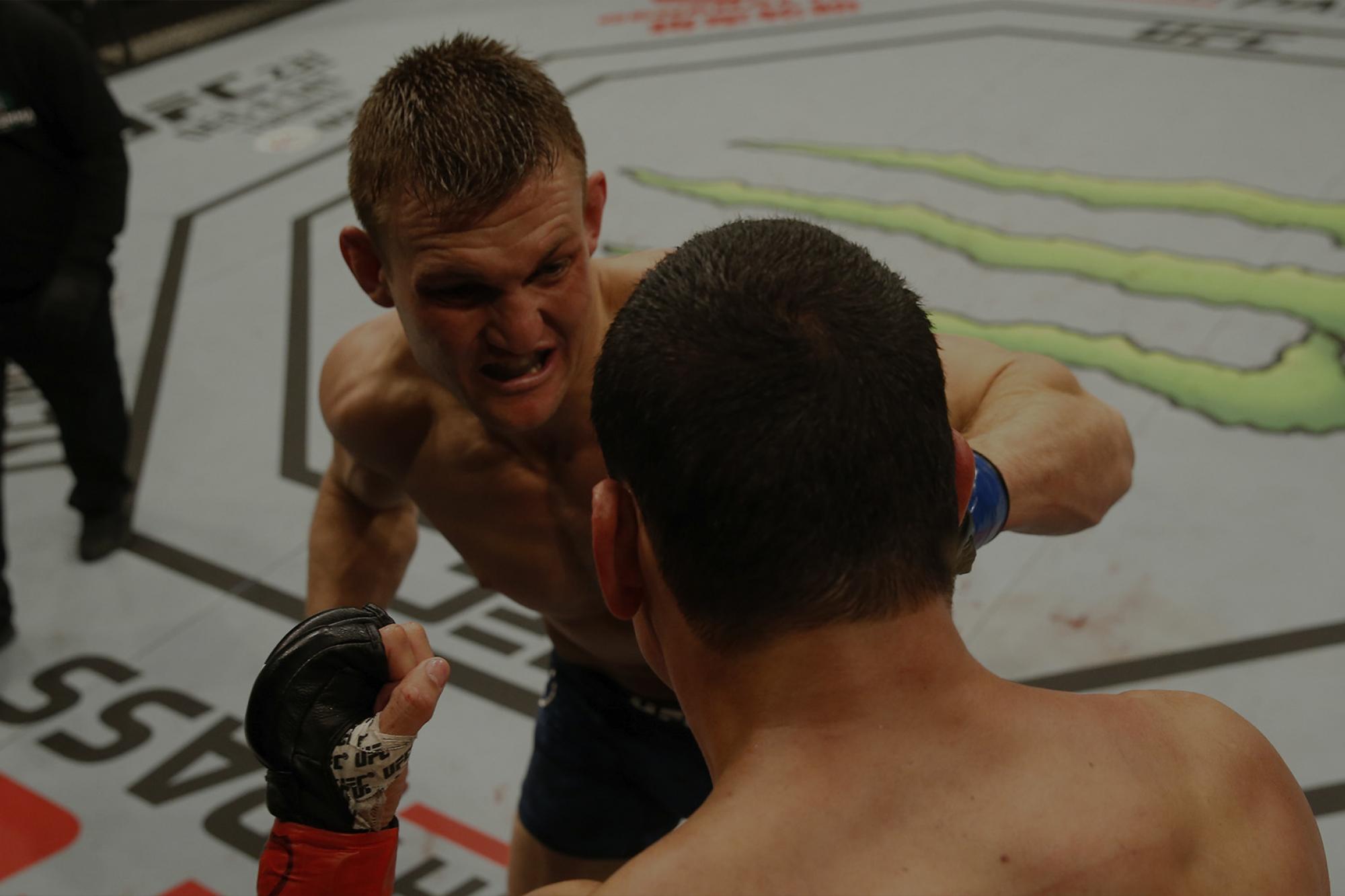 Inspiring Others A Main Focus For Heinisch

“I’ve got a story to tell and it’s an inspirational one and people need to hear it and be inspired. I know it can help a lot of people."
By Thomas Gerbasi • Mar. 12, 2019

Ian Heinisch has won 12 of his 13 pro mixed martial arts bouts. One of them earned him a UFC contract, and he broke that contract in with a short-notice win over middleweight contender Cezar Ferreira in November. This weekend, the Coloradan takes on another killer in England’s Tom Breese, and having said all this, it’s clear that “The Hurricane” is on his way to big things at 185 pounds in the UFC.

Yet that’s never the first focus when talking or writing about Heinisch. Instead, it’s his backstory, the one compiled before his rise to the UFC that fascinates people. It’s a story of drugs, addiction, prison sentences and yes, it’s compelling and well-documented.

“It’s all about perspective,” said Heinisch. “At the time, it was the worst time of my life, but when I look back on it, it was the best thing that could have happened to me. I was not going to be able to quit partying, quit my addiction, find God, all these things that happened to me in prison. I wouldn’t have been able to have done any of it without actually going to a prison and going to a prison that had opportunity. I was on a wrestling team, I could box, I could train Muay Thai, I could start an MMA program, I could learn Spanish, I could go to church. All these opportunities that were given to me, it was God’s plan for me. So I use all my troubles as a testimony and it doesn’t bother me to speak about it. It doesn’t bother me when people ask questions about it. I’m an open book, I like to share it and see all the people that I’ve already reached and all the people I’m going to. It makes me happy and it all happened for a reason.”

That’s an admirable attitude to have, especially when the other aspects of his story often get glossed over in favor of the sensational. He’ll have his opportunity to tell his entire tale, as he expects to start writing his biography soon, and it’s a chance to not just get his story out, but to use that story to help others.

“I’ve got a story to tell and it’s an inspirational one and people need to hear it and be inspired,” Heinisch said. “I know it can help a lot of people. I never had someone to really look up to who had the same path that I was on. I have a very unique story and if my story can reach people and I can be that person that they can look up to, I know it would have helped me a lot so hopefully I can be that for them.”

Again, it’s about perspective. And that’s the way he’s approaching his UFC career. To some, he’s already made it. He could walk away tomorrow and still have a redemption story for the ages. But that’s not the way he sees his life.

“A lot of people try to tell me, ‘Ian, you made it, you made it in the UFC,’ but that’s not my goal,” he said. “I did make it in the UFC and I’m gonna celebrate those little victories, but I’ve got to stay hungry and humble no matter what. The struggle keeps you strong, so I’ve got to keep putting myself in uncomfortable situations and keep pushing myself where I’m uncomfortable. I have to stay uncomfortable because if I get comfortable, that’s when I’m gonna get soft. I have to check myself, make sure the sword is sharpened and I have to remember my goals and remember my why. I’m not here just to be in the UFC and be a contender; I’m here to win the belt, I’m here to make a statement and I’m here to change lives with my testimony.”

He’s not wasting time getting after those goals, either. Taking Ferreira on a week’s notice could be described as reckless, but he pulled off the win. Breese is one of the top British prospects of recent years, but he didn’t blink in taking that fight, either. Reckless? Not exactly.

Fearless? Sounds like it, and Heinisch certainly delivered when his name was called against Ferreira. But as he admits, looks can be deceiving sometimes, so the first-time UFC jitters did make an appearance in Argentina last year.

“I kind of hid it pretty good, but that was probably the most nervous I’ve ever been for a fight,” said Heinisch, who didn’t get his usual opportunity to test out the cage and get used to the venue before the bout. And as the countdown to his walk approached, the nerves started kicking in. “The said, ‘Two minutes,’ and I was about to look at my coach and be like, ‘Coach, I can’t do this; I don’t know if I’m ready for this.’ I never had that run through my head. You spend your whole life watching the UFC every weekend and now you’re there, you’re in the back, you’re getting ready to walk, you’re fighting the number 16 guy in the world on six days’ notice, and there was that doubt of ‘Am I ready for this?’ But once I got in the cage, once he hit me a few times and I was like, ‘That’s all you got?’ I felt at home, I felt this is where I belong, and in the second round you can really see a calmness come over me. And that’s how I’m gonna come out first round against Tom Breese.”

You have to assume that once the battle begins, Heinisch has to think that he’s been in worse situations than a sanctioned mixed martial arts event. And that’s true for the Denver native.

“At the end of the day, we’re walking into a cage to fight someone with a referee that’s gonna pull us off,” he said. “I was in a cage where there was no referee and there’s no one gonna pull you off. You’re lucky if the guards come in time, but most likely they’re not gonna. So I was in a lot more scary situations. So I use that maturity and the things I’ve been through. This is fun and I enjoy doing this. What I had to endure, that wasn’t fun, that was forced on me. So there’s not much that I haven’t seen, not much that gets me too worked up and I go to those dark places before I walk out. I let my past be a weapon with me as I move forward in life.”

And that’s the main thing. The past is the past and Heinisch is moving forward. These are the good times now, and he’s embracing them.

“If I’m not enjoying it, if I’m not having fun, I’m probably gonna lose,” he said. “When I’m having fun, it’s like Mike Tyson said before; it’s not the angry fighter who wins, it’s the one who loves what he does, who’s having fun at what he does. And I have to check myself all the time. I get too disciplined, too regimented, too hard on myself and I worry too much. So I pull back a little and be like, ‘Have fun with this.’ That’s what it’s about. If I enjoy the process, I’m a winner right there.”