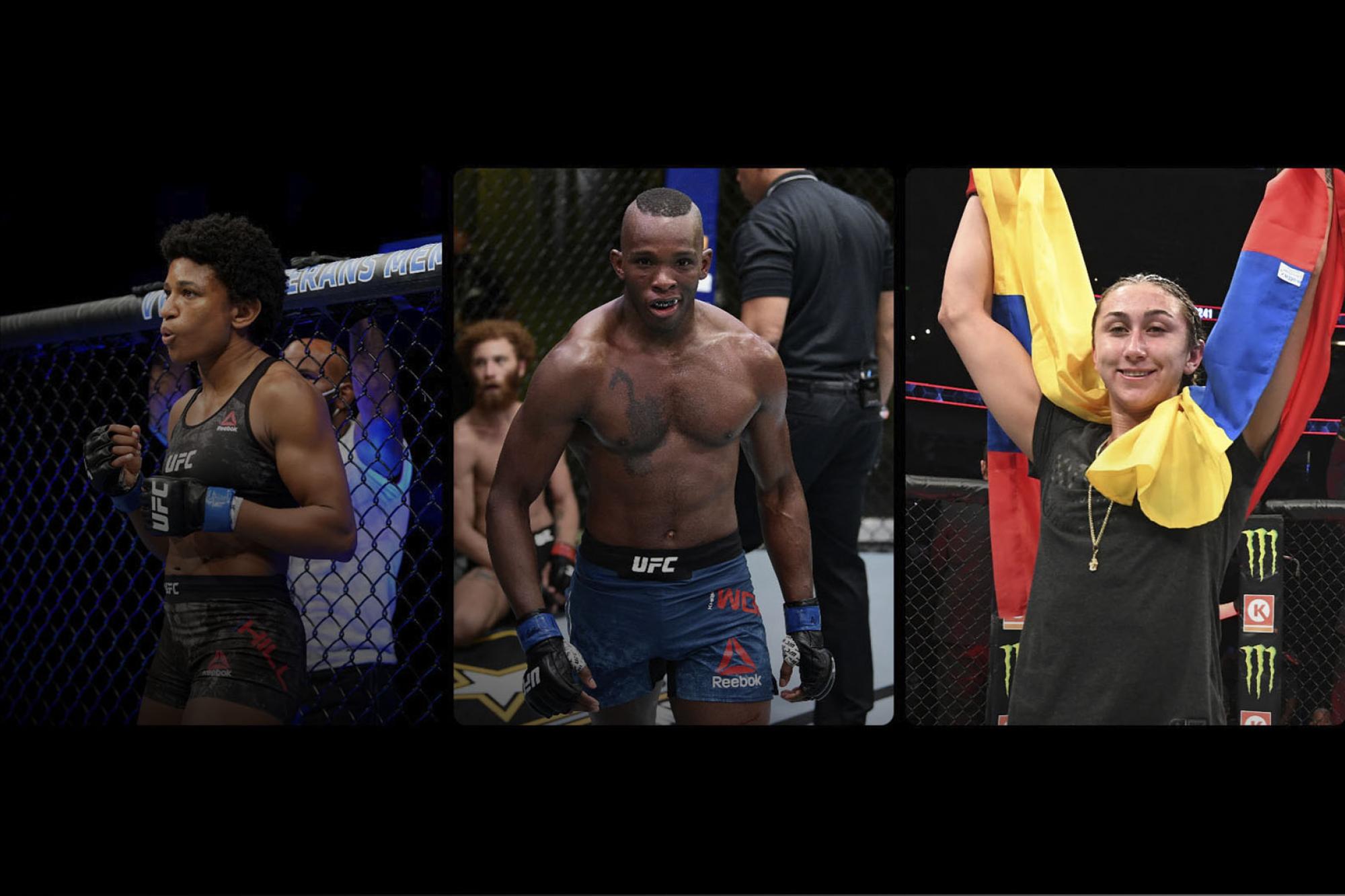 Fighters On The Rise, Sept 12 Edition

Don't Miss These Warriors When They Step In The Octagon For Fight Night: Waterson vs Hill
By E. Spencer Kyte, on Twitter @SpencerKyte • Sep. 8, 2020

This is the September 12 edition of On the Rise.

Angela Hill began her ascent towards title contention last fall with a first-round stoppage win over Ariane Carnelossi but has really come into her own in 2020. She jumped into a fight in January and stopped Hannah Cifers, then did the same a month later in Auckland and beat Loma Lookboonmee by unanimous decision.

When business resumed in May, the former Ultimate Fighter contestant was back in the Octagon right away, landing on the wrong side of a hotly debated split decision in a showdown with Claudia Gadelha that showed “Overkill” is a legitimate threat in the strawweight division. Regardless of her last result, this is unquestionably the best Hill has looked during her tandem stints with the UFC, and there is absolutely no reason to believe she won’t maintain her current form this weekend when she takes on Michelle Waterson.

Hill has talked at length about the benefits of staying active and jumping right back into another pairing with a Top 10 fixture following her frustrating result against Gadelha shows she’s serious and affords her the opportunity to maintain her momentum, as she didn’t lose any ground last time out.

Waterson has run hot and cold over the last four years, dropping two straight against top competition and then winning three straight against lower ranked opponents before stumbling in her last two outings.

Those setbacks came against former champions and current contenders Joanna Jedrzejczyk and Carla Esparza, so a win for Hill would further cement her standing alongside those talents, giving her the biggest victory of her career and sending her into the 2020 home stretch staring down a potential Top 5 pairing.

It was never a question of talent for Hill when she struggled to generate consistent results during her first UFC run and the initial stages of her second tour — it was equal parts experience and adjusting her mindset, as her four-fight run under the Invicta FC banner showed how sharp she can be when fighting regularly and not having time to get in her head.

That’s how things have been playing out for the last 12 months and it’s no coincidence that she’s never looked better.

You know how there are occasionally veteran players in the stick-and-ball sports who don’t reach the top tier until after having bounced around a little, at a time when most people were convinced their window of opportunity had closed, only for them to catch on and become the heartwarming story of the season?

Khama Worthy is the UFC lightweight version of that athlete.

He turned pro in 2012, lost two of his first three fights (including one to some guy named Paul Felder) and then spent the next several years making the rounds on the regional circuit, bouncing through promotions while often landing on the wrong side of the results in those crucial fights that had the potential to carry him to the next level.

But since losing to current UFC featherweight Kyle Nelson, who takes on another man who bested Worthy on the regional scene, Billy Quarantillo, next week, the now 33-year-old Pittsburgh resident has rattled off seven consecutive victories, including a pair of wins inside the Octagon.

Last summer, “The Deathstar” pulled off one of the biggest upsets of the year when he arrived on short notice and slept his former training partner Devonte Smith in the first round at UFC 241. When he returned to work at the end of June, Worthy earned a second straight stoppage victory over a promising young fighter as he submitted Luis Pena.

Now, the streaking veteran looks to make it three in a row as he takes on undefeated powerhouse Ottman Azaitar on Saturday night. The 30-year-old Azaitar has blasted his way through a dozen consecutive opponents, including finishing Teemu Packalen in his promotional debut last September at UFC 242, and shows promise, which makes him the ideal candidate to share the cage with Worthy this weekend.

It’s rare that fighters work their way to the UFC in their early 30s after kicking around the regional scene for a number of years, and even more rare that they make the most of it the way that Worthy has thus far. His two-win rookie campaign was a tremendous tale of perseverance, and it will be really interesting to see if he can keep it up as he kicks off his sophomore year on the UFC roster on Saturday night in Las Vegas.

A six-fight winning streak on the regional circuit highlighted by twin first-round head kick finishes of Jamie Thorton and Linsey Williams made Sabina Mazo one of the most hyped female prospects in the sport as she worked her way to the UFC. Many were excited to see how the young Columbian striker would handle the transition to the Octagon heading into her debut appearance against Maryna Moroz in March of last year, only to come away underwhelmed as Mazo landed on the wrong side of the scorecards.

Since then, however, the 23-year-old has started to find her footing and show some of the skills that made her a buzz-worthy fighter earlier in her career, as she carries a two-fight winning streak into this weekend’s matchup with veteran Justine Kish.

Two fights back, Mazo outworked Shana Dobson, who recently authored one of the biggest upsets of the year by defeating prospect Mariya Agapova, and she followed that up with a hard-fought, split decision win over JJ Aldrich at the start of the year.

Now 8-1 overall and carrying a little momentum, Mazo takes another incremental step up in competition as she shares the cage with Kish on Saturday. The former Ultimate Fighter contestant has been hampered by injuries and inconsistency during her UFC tenure, but holds prior victories over Randa Markos and Nina Ansaroff, and returned to the win column with a unanimous decision victory over Lucie Pudilova earlier this year in her first appearance following a two-year absence.

It’s easy to forget that Mazo is still extremely young and in the developmental phase of her fighting career because she’s been someone hardcore fans have been talking about for several years.

Adjusting to fighting at this level takes time and no one ever navigates the climb up the divisional ladder without having to move back a couple rungs here and there, and of late, Mazo has been making quality forward progress. Aldrich is a tough out who had climbed into the Top 15 before losing to Maycee Barber and has more experience than her 8-3 record suggests, so for Mazo to find come away on the happy side of a split decision verdict in their pairing earlier this year is another step in the right direction.

If she can continue building on her recent run of success with a third consecutive win on Saturday, it could signal that the “Colombian Queen” is finally starting to blossom into the contender many envisioned her to be upon signing with the UFC.