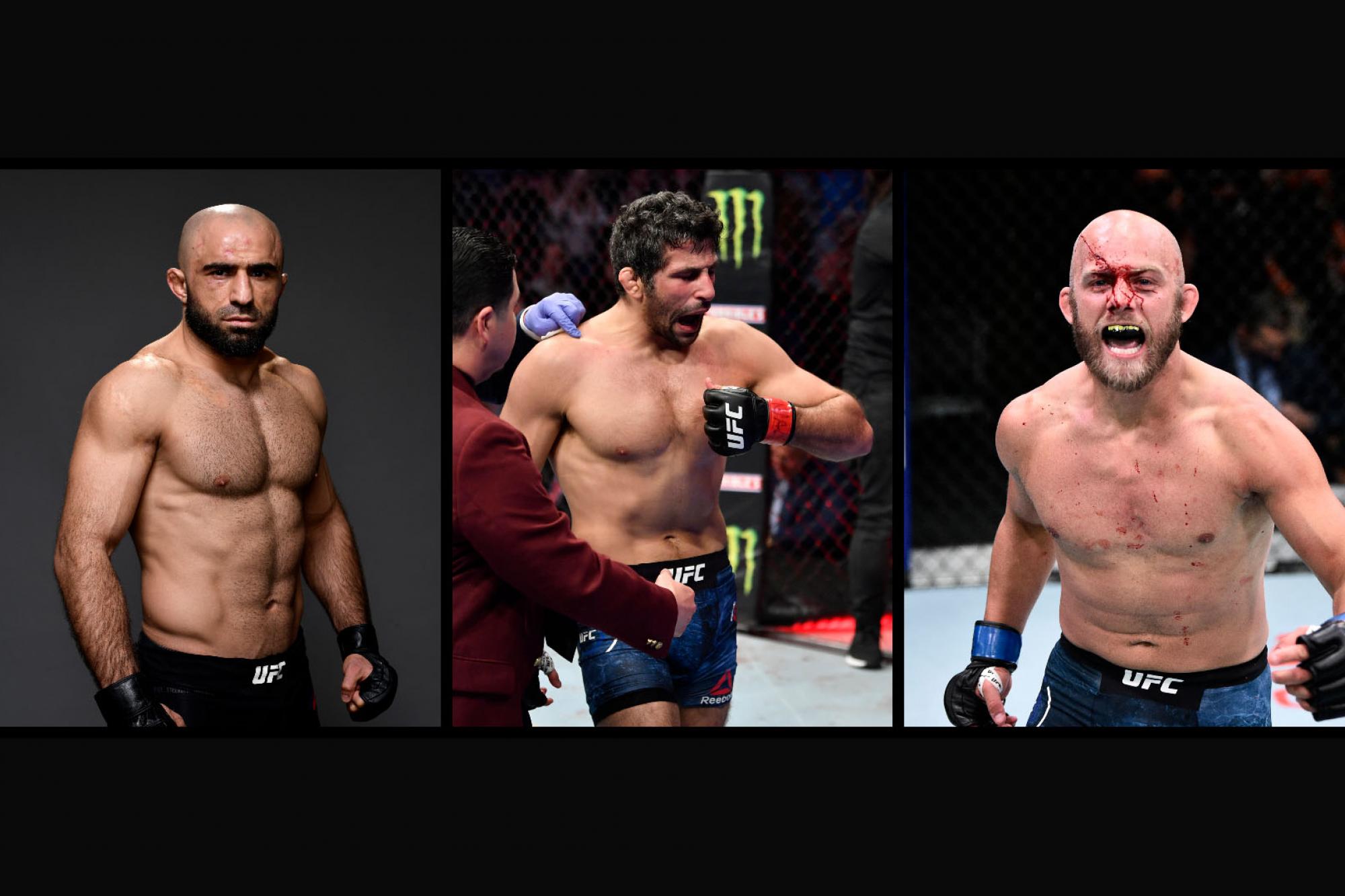 Fighters On The Rise: August 8 Edition

Even in the best of times, when everything is operating normally, we all have those bits of information and knowledge that we know, but struggle to recall with any amount of surety.

Did I see that movie? Have I been to that restaurant? Has Donald Cerrone fought that guy before?

When you mixed in a global pandemic and numerous months of being quarantined where the entertainment world collectively pressed pause, it’s understandable that the winning streaks and recent results of some UFC competitors have fallen into that vast chasm where information we know, but can’t 100 percent remember exists.

As such, this week’s edition of On the Rise is dedicated to confirming the facts you think you know, but aren’t confident enough to share publicly, about a pair of athletes set to compete this Saturday at the UFC Apex, with an intriguing sophomore to watch.

Here’s a closer look at those three athletes and the stone cold facts about all three as they prepare to return to action this weekend in Las Vegas.

This is the August 8 edition of On the Rise.

That’s a question that I saw asked more than a couple times when this bout was announced, the implication being that the former champion Weidman was a considerably bigger name than his Dagestani foe (which is true) and the pairing felt unexpected.

But the thing people questioning the matchup couldn’t recall with confidence is that Akhmedov has actually been the more successful of the two over the last couple of years, and while the level of competition they’ve each faced certainly has something to do with that, the fact remains that the 32-year-old veteran is unbeaten in his last six and 3-0-1 since shifting to the middleweight division, while Weidman enters this contest with just a single victory in his last six starts and coming off back-to-back stoppage losses.

Akhmedov is one of those fighters who is destined to live under the radar because there is absolutely no flash when it comes to his approach in the cage. He is a grinder through and through, and that has produced nothing but positive results of late.

Last year, the American Top Team representative registered decision wins over Tim Boetsch, Zak Cummings, and Ian Heinisch to maintain his unbeaten record in the UFC middleweight division and give him six straight appearances without a setback. Overall, Akhmedov is 8-3-1 inside the Octagon and 20-4-1 for his career, both of which are impressive tallies.

Obviously, this is the most high-profile fight of Akhmedov’s career, but it’s one he’s earned through his performances. Currently stationed in the lower third of the Top 15, a victory over Weidman might not catapult him into the title conversation as it would have a year ago, but it will force people to sit up and take notice of the streaking veteran making slow and steady progress up the divisional ladder.

Much like Akhmedov, Dariush is one of those streaking fighters people tend to overlook in the loaded lightweight division. For whatever reason, the main association fans and media seem to have with the 31-year-old veteran is his UFC 222 loss to Alexander Hernandez, which took place two-and-a-half years ago and, coincidentally, is the last time Dariush landed on the wrong side of the results.

Since that fight, the decorated grappler has gotten healthy and gone on an impressive four-fight winning streak, which includes submission wins over Drew Dober and Frank Camacho, a second-round knockout win over Drakkar Klose, and three straight Performance of the Night bonuses.

Saturday night, the Californian looks to extend his winning streak to five when he takes on another of the unsung talents in the lightweight division, Scott “Hot Sauce” Holtzman, who enters on a two-fight winning streak of his own and having won five of his last six bouts.

Dariush is a perfect example of a fighter who rocketed out of the gates, climbed into the rankings, and then stumbled through a three-fight stretch that included losses to Edson Barboza and Hernandez with a draw against Evan Dunham sandwiched in between. But looking at his resume as a whole, recognizing that just about everyone suffers through a rough patch in their career, and knowing that he was dealing with a persistent neck injury that severely limited his training casts Dariush in a different light and makes him an intriguing dark horse contender in the lightweight division going forward.

He already has a dozen UFC wins, including victories over Carlos Diego Ferreira, Jim Miller, and James Vick, and has been lights out since late 2018, showcasing steadily improving striking and a return to the suffocating grappling skills that made him an interesting prospect to watch when he first arrived in the UFC.

Winning five consecutive fights in the talent-rich lightweight ranks is difficult and if Dariush can accomplish that feat on Saturday with a victory over Holtzman, he too will emerge as a legitimate contender.

In the span of three days in the middle of June, Jaynes’ life changed.

One minute, he was a talented regional fighter on a four-fight winning streak, wondering when the next opportunity to compete was going to come his way. Three days later, he was 1-0 in the UFC after registering one of the more impressive debut performances in recent memory.

Jaynes was tapped to face Frank Camacho on two days’ notice on the preliminary portion of the June 20 fight card at the UFC Apex after Matt Frevola was forced out of the bout at the 11th hour. The Las Vegas resident accepted the challenge, made weight, and came out firing, meeting Camacho in the center and putting the veteran on roller skates less than 30 seconds in.

Once Jaynes saw that Camacho was wobbling, he turned up the tempo, pressing forward and connecting with several clean, heavy shots along the fence, prompting referee Herb Dean to step in and halt the fight with Camacho out on his feet just 40 seconds in.

Now, with the benefit of a full training camp and bolstered by his bonus-winning debut, the 30-year-old is back for his sophomore appearance in the Octagon this Saturday, paired off with Canadian Gavin Tucker in what should be an absolute barnburner between two talented strikers.

The 34-year-old Tucker’s UFC run has been up and down and back up again as he looked tremendous in his debut win over Sam Sicilia, took a tough loss in his sophomore showing against Rick Glenn, and then returned last summer in Edmonton where he registered a third-round submission win over SeungWoo Choi to exorcise some of the demons from his bout with Glenn, which took place in the same venue a little less than two years earlier.

The competition for “Rookie of the Year” in the UFC is heating up, but Jaynes’ improbable debut effort definitely has him in the mix and another strong showing on Saturday night against Tucker should keep him in the conversation heading into the dog days of summer.