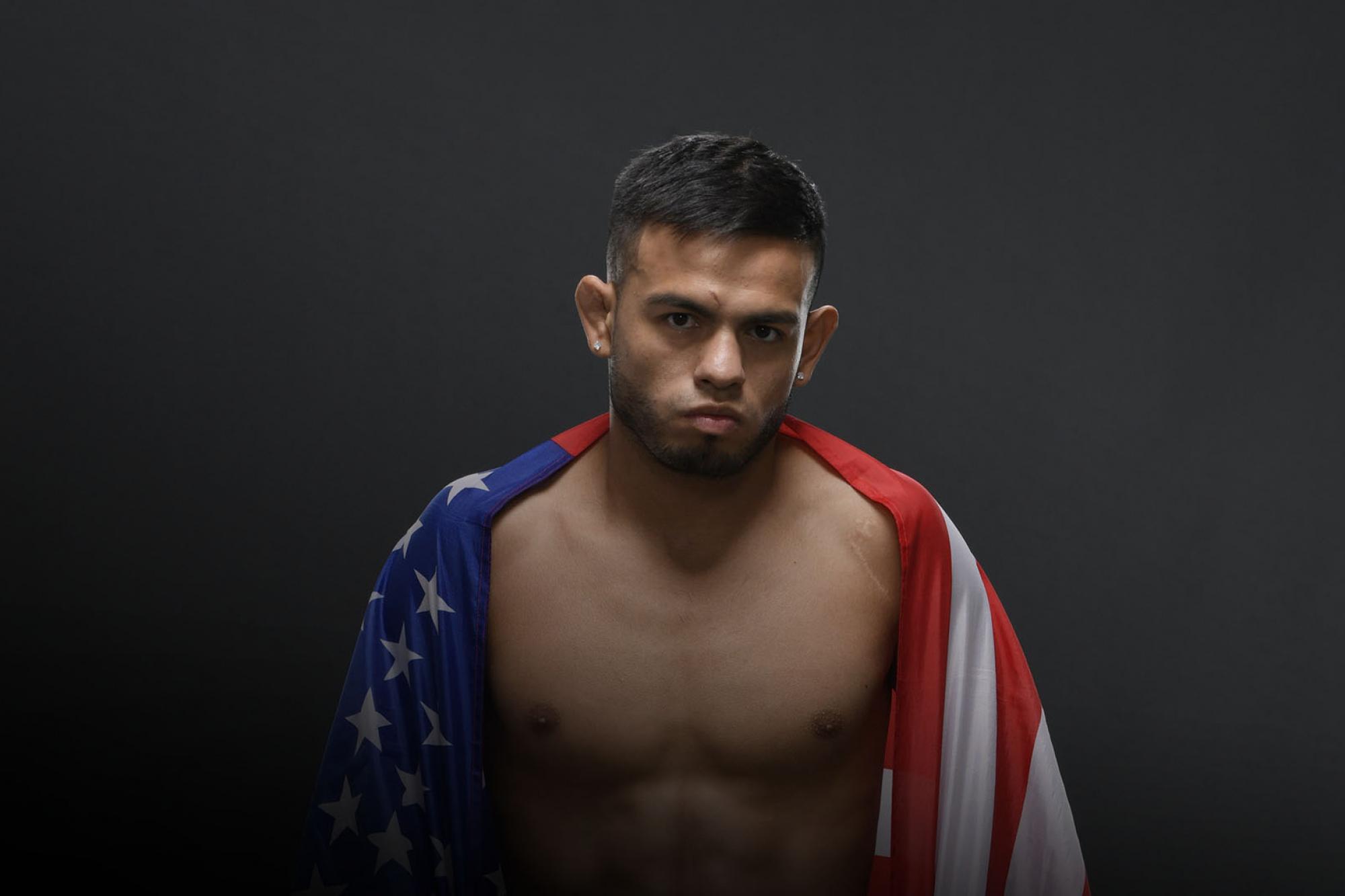 Rising Flyweight Sees A Possible Title Shot With Another Big Win At UFC 255
By Thomas Gerbasi, on Twitter: @TGerbasi • Nov. 19, 2020

These are good times for Brandon Royval.

The Colorado native is 2-0 in the UFC with two Fight of the Night bonuses, allowing him to quit his day job and fight full-time; those two wins also landed him at the number six spot in the flyweight rankings, and with a victory over Brandon Moreno this Saturday in Las Vegas, he could be looking at a title shot.

“I'm trying not to f**k that up,” laughs Royval, who has an idea that it’s his honesty – along with his go for broke fighting style - that has fans filling up his bandwagon.

“I think what got me to where I'm at is being authentic and being real. I'm saying what's on my mind and I'm not trying to be anything I'm not. I'm a hard critic on myself and I do think I need to get better. I know the flaws I have, but I know where my level is at and I know where I can perform. That's why I'm so hard on myself.”

Giving his rapid rise in just two UFC bouts, it’s hard to believe that at this time last year, Royval didn’t know if he was going to still be a professional fighter in 2020.

“My head was all over the place,” he said. “I was probably gonna quit if I lost the LFA title shot.”

At the time, Royval had a familiar pattern forming in his career. He would win a few, then lose a big fight, win a couple more, then another key loss. He clearly had the talent, but consistency was eluding him.

“Fighting on the local scene, you're almost to the UFC and then you lose a fight and then you get set back a whole year before you get back,” he said. “You're got to win three fights, two fights to even get in that talk. That's another year of your life, and this is you working full-time, fighting for maybe five thousand if you're lucky. And sometimes the juice is not worth the squeeze.”

Order UFC 255 For Any Device

In November 2018, Royval lost a decision to future UFC bantamweight contender Casey Kenney but bounced back with a first-round win over UFC vet Joby Sanchez. Now he was going to face Jared Scoggins for the vacant LFA flyweight title on November 22 of last year until Scoggins pulled out of the fight. Nate Williams stepped up, and Royval was anything but focused.

“I remember thinking if I lose this fight, I'm probably gonna be done with MMA because I keep getting so close and right when I'm there it just doesn't happen,” he recalled. “This is a hard life to maintain and maybe I'm not built for this.”

As he prepared for the fight to begin, things still hadn’t cleared up.

“Either my dream continues, or I'm done after this,” said Royval. “That's a f**ked up mind state to walk into a fight with.”

Twenty-three seconds later, Royval had submitted Williams.  Six months after that, Royval was a UFC fighter, facing veteran contender Tim Elliott. Again, Royval secured a submission win, and this one came with a $50,000 Fight of the Night bonus.

A couple days after returning home to Colorado, he gave his two weeks’ notice. He was leaving his job as a youth service specialist to become a full-time fighter.

“I took it as an investment in myself,” he said. “Now I can take time to get better, do the proper recovery and live the real life of a fighter. It's been great.”

MORE UFC 255: Fight By Fight Preview | How To Order | Brandon Moreno | Every Finish By Shogun Rua | Embedded | Rise Of Alex Perez | Countdown | Fighters On The Rise | Free Fight: Shevchenko vs Chookagian | Inside The Octagon

That doesn’t mean making that call to quit was easy.

“It was scary for me, honestly,” Royval laughs. “I never hated my job. I liked my job, but I didn't want to put my notice in and come back a month later.”

He didn’t have to worry. By September he was booked again, this time for a bout against another contender in Kai Kara-France. As the fight drew nearer, he got his first taste of social media trolling.

“I had all these people messaging me and they're like, ‘Kai Kara-France is gonna f**k you up,’” he laughs. “You try not to read it, but up until the Kai Kara-France fight, I had 3,000 followers on Instagram. It's hard not to read it when you have two followers. (Laughs) I had all these people talking s**t to me. Then you get that little bit of self-doubt. ‘Am I gonna get fucked up out there?’” 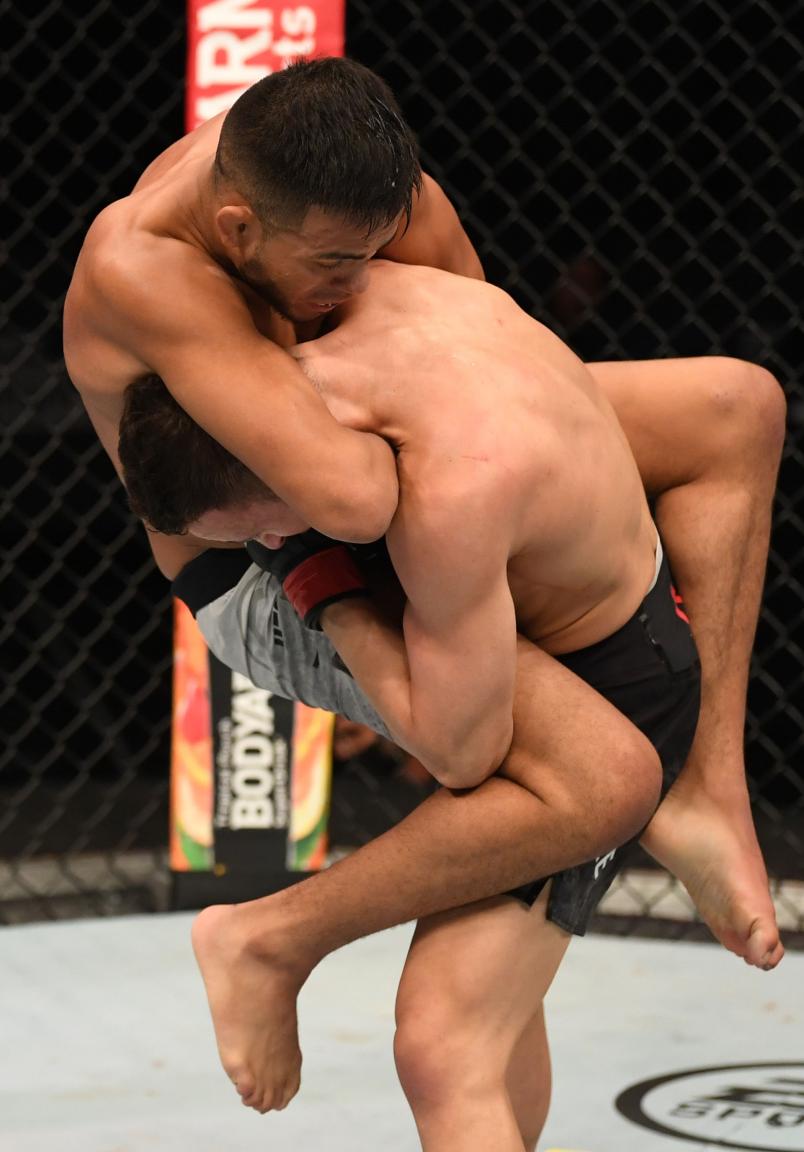 Attempting the sub vs France on Fight Island, (Photo by Josh Hedges/Zuffa LLC)

Royval did just fine, submitting Kara-France in the second round of another Fight of the Night performance. As soon as it was over, he had a message for the haters.

“Right after the fight, I jumped up on the cage and I had the cameras in my face and I was like, ‘Keep betting against me mother**kers.’ I'm always emotional after my fights.”

There will be few, if any, doubting the 28-year-old from here on out, and while he’s been humble in victory, and equally critical of himself, he does take pride in the fact that what he knew all along about himself is now visible to the world. About the only bad news is that after a year of consistent training, a win over Moreno likely won’t get him the time off he hoped for.

“Talking to my coach (Marc Montoya), I said after this fight I might take some time off. He said, ‘After this fight we've got a title shot.’ (Laughs) Aw s**t, that's a good point, that might be true. So after I fight Moreno, I'm definitely gonna go right back on my diet, and whatever happens, I'll be ready to go.”

So when was the last time he had off?

Well, it has paid off. And Royval is not complaining.

“I guess you've probably seen after some of my interviews I'm not the most confident fighter there is (Laughs), so realizing that I belong is kind of amazing. It's been a great feeling. It's the best feeling of all.”